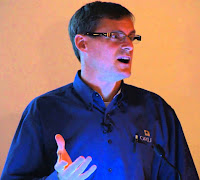 Dominic M. Halsmer has a PhD in Mechanical Engineering from UCLA and is currently Professor of Engineering and Dean of the College of Science and Engineering at Oral Roberts University, which is, of course, a cargo cult institution and not a real university by any stretch of the imagination. As befits someone in a position like this, Halsmer is – like so many other signatories to the Discovery Institute’s petition A Scientific Dissent from Darwinism – not a scientist but a cargo cult scientist, who is “studying how the universe is engineered to reveal the glory of God and accomplish His purposes.” In particular, Halsmer is a creationist, and much of his, uh, output consists of attempts to apply engineering concepts in support of intelligent design; the results are primarily published on the Internet. Casey Luskin was apparently very impressed with a paper by Halsmer arguing for an “engineered world” published in the International Journal of Design & Nature and Ecodynamics (of which we know little – it may be a real journal but certainly doesn’t sound like it; the volume including Halsmer’s paper also included an anti-evolution rant by young earth creationist (and engineer) A. C. McIntosh), which you can read about here and seems to mostly be a regurgitation of Paley’s old watchmaker argument that points out the “biofriendliness” of the universe (oh, yeah) and referring to Hoyle, apparently in blithe and total unawareness of the critical literature on these issues.

Diagnosis: Another religious fundie and non-scientist who really, really wants his religious ramblings have anything to do with science – with the results you’d expect. Halsmer seems like a rather obscure figure, but Oral Roberts University is one of the more significant pretend universities in the US, and deserves exposure.
Posted by G.D. at 3:48 AM