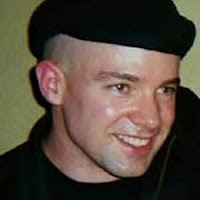 A former student of our old friends Ed Dames and Joni Dourif who has managed to strike out on his own, Aaron C. Hanson (born Aaron C. Donahue) is a remote viewer who, according to himself, is able to see and talk to aliens. He is the son of legendary nut James Donahue, who thinks that the angels of Christianity are really a race of bat-like aliens from the constellation of Orion who live in a spaceship hidden above Earth and are trying to assume control over humanity, and also that Earth is home to Anunnaki, Pleiadians, Lumarians and Triads, as well as some type of “keepers on Earth who hold the answers.”

Aaron Hanson has continued to promote his father’s mythology with zest, imagination and little concern for reality. He has for instance argued that Jesus’s teachings were corrupted when the pseudo-angels/batmen deceived and even possessed his followers. Accordingly, today’s Christianity is part of an alien plot to take over the Earth. Naturally, Lucifer and demons described by Christianity are really the good guys (Lucifer created humans by genetically engineering primates). Hanson has accordingly started his own cult, the “Luciferian order”, based on his ramblings and alleged prohpecies remote viewing results. He has (why not?) even claimed that he is Lucifer (and/or the Mahdi). His father, by the way, used to claim that all the governments and financial institution in the world are controlled by some kind of dragon laired under the Vatican who is also behind all the wars in history.

Hanson was apparently supposed to take part in the film “Suspect Zero”, but had some kind of fall-out with the director (who would have guessed), dismissing the result as “... a classic treachery by the angelic-driven lords of American media” and, for good measure, placing a curse on them.

He also seemed to consider running for president in 2012 on a platform of dissolving the borders between Mexico, the US and Canada, creating an electronic currency to be “embedded along with a world identification chip under the skin”, dissolving the US Constitution, permenantly shutting off all street lamps around the world (“once the elderly are euthanized, there will be no more need for these and other sources of pollution”); abolishing all sporting activities; and “Set the ultimate doomsday (mutually assured destruction) device upon the moon that would at least in theory, create tidal disruption altering life as we now know it here on earth. The threat of this would help ensure social cohesion during the coming troubled times of world unification. Placing several re-engineered neutron bombs upon the moon in key areas might be used to either split its core and/or alter its orbit enough to do the job. Iran’s Caliphate will alone hold the key.” He also remote-viewed that Mitt Romney would win the election. So it goes.

Diagnosis: He might be joking, but if he is the joke runs very, very deep. Seriously deranged.

Hat-tip for most of this entry: Rationalwiki.
Posted by G.D. at 3:41 AM