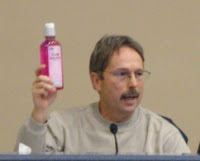 Glenn Harper is a local Tea Party politician and village idiot in Hartland Township, Michigan, whose main claim to fame is managing, in 2011, to convince the township’s board of trustees (he somehow got himself elected to that group) to ban the addition of fluoride to area water supplies. As usual, the decision was based on conspiracy theories and pseudoscience, including denying the dental benefits of fluoride while endorsing mythical health dangers, for instance the myth that fluoride makes bones brittle and increases the risk of cancer. Indeed, Harper even tried to end fluoridation before the vote. “We’re making the decision for other people,” said Harper, claiming that “our biggest complaint about Obamacare is that bureaucrats and politicians are going to be making medical decisions for us. Here’s a perfect example of where we’re doing that. We don’t need to do that.” Right. Critics worried, not unreasonably, that the decision would give the township a reputation as a place swayed by conspiracy theories.

Diagnosis: At least he managed to get the township of Hartland, MI, a reputation for being a place swayed by conspiracy theories, but that’s the price you pay when you elect your village idiot to the board of trustees.
Posted by G.D. at 5:19 AM