Zen Honeycutt (we have no reason to think its not a given name) is an anti-biotech activist and figurehead in the anti-GMO movement, a conspiracy theorist, and the founder of the anti-biotech organization Moms Across America (MAA). In that role Honeycutt has been heavily involved in spreading bizarre myths, claiming things like that going GMO-free and organic cures autism (she has appeared at the Autism One quackfest conference, for instance, and on Dr. Oz's show – neither of which inspire much confidence in what she is saying – as well as The Liberty Beacon), and that glyphosate causes maladies ranging from mental illness to infertility.

People who know anything about the topics disagree approach, of course, and Honeycutt’s approach to critics is to question their integrity (and even identity) and assume that they are bought by nefarious shadow organizations, since no one can disagree with her delusions without being corrupt and out to get her and ruin the world. And of course, since Honeycutt’s main scientific credential is being a mom she dismisses non-mom contributions as irrelevant (“You don’t have children. You don’t know what it’s like. You haven’t had a child come from your body”). Indeed, the motherhood angle really is the subterfuge on which her approach to biotech issues is based; science and evidence and cold facts matter little when up against the mommy instinct (Honeycutt and her group accuse critics of being “mommy shamers”). That, and – of course – shill accusations; when you don’t understand and therefore cannot engage with the science, dismiss the scientists as corrupt; it’s the mark of idiots to try to explain why someone is wrong before establishing that they are, in fact, wrong, and thinking that questioning someone’s motives for making a claim is a substitute for evaluating the claim. But when you aren't competent to engage with the claim itself, what choice do you have? Examples of what interacting with Zen Honeycutt while disagreeing with her is like can be found here and here.

The MAA’s misinformation-based political campaigns are sponsored by donors that include Organic Consumer’s Association, Nature’s Path Organic and Nutiva, largely unregulated commercial outfits that stand to gain a lot from any successes MAA’s campaigns may enjoy. But those are good companies. The companies that in fact don’t sponsor the critics of MAA are evil, and conflicts of interest arise only for those who disagree with MAA while being (in fact not) sponsored by companies.

GMOs
Honeycutt knows nothing about GMOs, and ignorance breeds fear and so on. A good illustration of her approach can be found in her own responses (discussed here) to the “scientific report” MAA published in 2013 concerning the “stunning” nutrient content in GMO corn vs. non-GMO corn (apparently they mistook a report of soil data with nutrient contents – and promptly failed to understand the difference when it was pointed out to them), complete with no cited sources, no methods, and blatantly wrong definitions in the footnotes – when scientists pointed out the, uh, shortcomings of the “report” in the comment section, the comments were of course mostly deleted, but Honeycutt’s own telling responses include:

- “(GMO nurition) explains a lot…why animals will NOTeat GMO corn even in the dead of winter.” (A glorious example of PIDOOMA; Honeycutt doesn’t appear to understand why anyone would ask for references.) 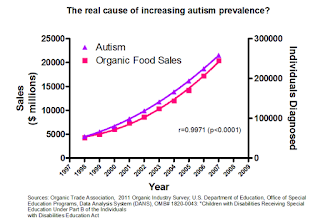 - “(this is) Why human allergies have increased 400% since GMOs were introduced…why health issues have skyrocketed.” The increase, were it accurately reported, correlates better with the rise in sales of organic foods, in fact.
- “Irregardless of this report, I have scores of Moms who have answered our health survey who repeatedly share that going off GMOs reduced, improved or dissappeared their children’s and their own health issues.” That would be the survey on her own website.
- “Not eating something that has this many toxins in it would for sure be a factor in an improvement in health.” Yes, the toxin gambit. Only Honeycutt can know how her mind gets GMOs to have anything to do with toxins, but she probably doesn’t.

At least it gives you an idea of what you are dealing with.

Glyphosate
Honeycutt and MAA are also ardent campaigners against glyphosate (actual facts here) with all the accuracy and precision of the dolphin healing section at whale.to. According to Honeycutt and the MAA glyphosate residues can be linked to autism, allergies, infertility, eczema, fibromyalgia, Crohn’s Disease, cancer, childhood tantrums and pneumonia, and the existence of such residues in breastmilk is accordingly a real cause for concern. Of course, glyphosate doesn’t cause any of the things mentioned (this one refutes the idea that glyphosate is a carcinogen, for instance), and residues are in any case not found in breastmilk, as confirmed by real scientists with real studies. The idea that it does, comes from an incorrectly processed assay of ten samples with a method that is known to generate false positives, gathered and reported by … none but Zen Honeycutt herself and published in the reputable venue of the MAA website. Honeycutt’s response to the refutation of her results was to invoke a Monsanto-led conspiracy. She didn’t engage with the data, of course.

Not surprisingly, Monsanto is Honeycutt’s prime nefarious Illuminati shadow government agency (this is a telling refutation of that idea), and one of the main reason why people continue to disagree with Honeycutt is “the hold Monsanto has on our media”.

Her tweet “@BarackObama Teen pregnancies are at an all time low because our people are being sterilized by glyphosate in our food and water‼!” sums her approach to facts up fairly well. In fairness, the idea expressed in the tweet isn’t new – insane conspiracy websites like NaturalNews and GreenMedInfo have been pushing it for a while. But it is exasperatingly stupid.

Cures
Fortunately, eating organic can reverse or even cure the maladies caused by GMO foods. (According to Honeycutt, “we want not only GMO free but organic, to avoid pesticides,” which suggests that she is under – or at least pushes – the delusion that organic foods are pesticide-free). On Dr. Oz’s show, Honeycutt claimed that her son had at some point been experiencing autism symptoms; because her doctor didn’t test him for glyphosate levels, Honeycutt used a private lab which detected glyphosate levels “8 times higher than found anywhere in Europe urine testing,” and that within six weeks of going “completely GMO-free and organic, his autism symptoms were gone and the level of glyphosate was no longer detectable.” She didn’t back up her claims because the idea that autism can be reversed by going organic is ridiculous and false.

Another cure for autism pushed by Honeycutt is … “molecular hydrogen”. That’s right. Molecular hydrogen is a tiny form of hydrogen that enters your cells and turns the bad free radicals (not the good ones) into water; and to top it all: it’s natural, so it’s safe. The cure comes in the form of a little pill that you drop into water containing hydrogen and magnesium and releases hydrogen gas. Yes, magnesium hydride tablets.

Diagnosis: Though their grammar is better than the grammar of people who think they are vampires and rant about how alien atheist-Muslim lizards from Mars are trying to mind-control them through their television sets, the actual claims made by Honeycutt’s group aren’t many steps up. And the tactic of accusing your opponents to be shills for Monsanto because your mommy instinct tells you that you’re right and that those who disagrees you with you are organized and wouldn’t disagree with you if they were honest isn’t much better than the tactic of dismissing your opponent’s claim that lizard people conspiracies are unlikely by pointing out that this is precisely what those in on the lizard people conspiracy would say. But the MAA has influence – even some political clout – and that’s very, very scary.
Posted by G.D. at 4:39 AM