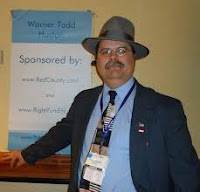 Warner Todd Huston is a wingnut and occasional writer for Breitbart.com, who at least used to be part of the Stop the ACLU group. Huston is the kind of guy who would blame the Santa Barbara shootings on hippies and universities since colleges are now all about gay rights and frivolous sex and have completely stopped being places of learning and education and are thus contributing to … well, if the connection between porn and radical Islamism isn’t entirely clear to you then you are probably already lost to the “moral corruption” of contemporary higher education. That kind of guy. Here is Huston on the Christmas tree tax. And yes, he is a complete moron.

Huston is actually probably most famous for his 2014 article for Breitbart where he reported that Loretta Lynch, Obama’s nominee for attorney general, had been part of Bill Clinton’s defense team during the Whitewater scandal. Apparently college didn’t teach Huston to do his homework. He also has a long history of arguing that kwanzaa is a fake holiday with a racist goal that is completely made-up, unlike other holidays which apparently weren’t made up, and we have no idea what the distinction amounts to.

He has written for RenewAmerica, too, no less, for instance arguing for the criminalization of Islam long before it became mainstream (not really, though).

Diagnosis: We could continue, but you get the gist. Angry, delusional zealot.
Posted by G.D. at 3:34 AM