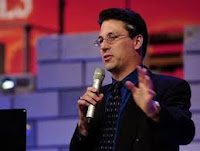 Yeah, yeah. Another anti-gay lunatic. The World Congress of Families (WCF) is another wingnut anti-gay hate group – as is virtually guaranteed by the presence of the word “Family” in their name – and Larry Jacobs is their executive director. Though the WCF is US-based, it has an international focus (there’s a good profile here), and works tirelessly to prevent countries from decriminalizing homosexuality (something that really wouldn’t go over particularly well in the US anymore) and to support the implementation of anti-gay legislation. Jacobs has accordingly cheered on Russian laws banning gay pride demonstrations and supposed “homosexual propaganda,” calling the ban a “great idea” and praising the initiative as a means for “preventing [gays] from corrupting children” (Jacobs calls the ban Russia’s “child protection law”). He even called the Russians the “Christian saviors to the world.” Jacobs’s group even planned to arrange their eighth international conference at the Kremlin’s Palace of Congresses in Moscow in 2014, although it was apparently cancelled. According to Jacobs Russia has “got a problem with marriage rates and fertility, and it doesn’t help if you’re encouraging non-reproductive behavior.” Just think about it for a second (Jacobs obviously didn’t). In 2013 Jacobs was also involved in pushing for similar measures in the Ukraine.

Meanwhile, “radical leftists, radical environmentalists, radical feminists and radical LGBT groups” are tirelessly working “to break the family apart”, since the family “is a threat to the state”, promotes freedom, is a threat to authoritarianism and “radically opposes their leftist agenda”. No, it’s not the argument of a reasonable person; Jacobs left that boat a long time ago. It’s worth remembering that WCF is the only group in this debate that actively opposes families and actively seeks to ban families that don’t conform to their ideal.

In 2015 Jacobs repeated his claim that Russia is the “hope for the world”. He also complained about how cultural Marxism has become a threat to freedom and freedom of speech in the West and lauded efforts to ban positive descriptions of homosexuality. We in the West have also “lost the freedom of education and culture;” no, it’s not clear what that means, but “[l]et me explain,” said Jacobs and proceeded to produce a word salad. At least he emphasize that “there is also a spiritual element to this.” Good to know.

In 2014 the WCF launched a petition accusing the Human Rights Campaign of being hateful since the HRC was quoting the WCF’s own hateful bigotry toward gay people and describing their efforts abroad to institute oppressive measures that they recognize wouldn’t fly in the US.

Diagnosis: Extremist with theocrat leanings who apparently hates America and the Constitution. His influence is hard to gauge since he seems most concerned with supporting hate, tyranny and violence abroad.
Posted by G.D. at 4:09 AM