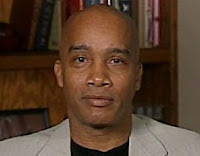 We could perhaps have awarded an entry to Cicero-based bishop Herman Jackson, who threatened a federal judge with the wrath of God – “because of Judge Sharon Coleman’s continual mocking of God’s ecclesiastical order and the sanctity of family/marriage, the wrath of God almighty shall soon visit her home” – but he is otherwise just a fraudster and crook.

Kevin Jackson is less well-hinged. Jackson is a wingnut radio personality affiliated with the Black American Leadereship Alliance (together with people like Jesse Lee “thank God for slavery” Peterson, Charles Butler and Vernon Robertson), and the kind of guy who claims that feminists are waging “a war against beautiful women” and that President Obama “has taken America back into the 1960’s except now whites are enslaved to blacks.”

On Feminism
In more detail, Jackson complains that society is currently being run by “women who look like men, act worse than men, and who have essentially sacrificed their womanhood at the alter [sic] of ‘achievement.’” (We don’t like to link directly to this kind of shit, but his article “Ugly Teachers: Product of Women’s Movement” is something to remember him for). “There is a war against beautiful women, and it’s being waged by the Women’s Movement, ironically …,” says Jackson, and “[l]et’s face it, the women who rise through the ranks in Leftist politics look like dudes. In fact, if you put high-ranking female political Plutopians against their ‘male’ counterparts, it would be the CHICKS WITH … well … CUPS, and I’m not talking bras. … Women on the Left secretly wish to build a society of powerful ugly women … to match how they feel (and are) inside. A beautiful Liberal woman (not that I’ve ever seen one) might as well be fitted for knee pads and given Bill Clinton’s ‘How to Pleasure a President While On Your Knees Under a Desk’ manual and a box of Cuban cigars.” He’s not a feminist.

Miscellaneous politics
So, yeah, the influence of women and liberals has been pretty nefarious. Indeed, the influence of liberals is so powerful that they have even “changed the definition of pedophilia,” says Jackson, presumably referring to the delusional and profoundly dishonest (though Jackson might actually believe it) wingnut idea that growing social acceptance of and civil rights for gays and lesbians will lead to the normalization of pedophilia. Here is Jackson weighing in on Dylann Roof (the murderer). Apparently the murders are to blame on liberals, since “he’s a product of culture, a culture Liberals own.”

According to Jackson, then, it is pretty clear that America needs a white president, though he is quick to add that the sentiment isn’t racist: “Wanting a white Republican president doesn’t make you racist, it just makes you American.” I don’t think … that claim is true. But Jackson digs elaborates: “The election of a recognized black president was not supposed to change anything. In fact, it was supposed to (1) ease any perceived racial tensions, and (2) allow the government to focus on legislating without race. So America would be more free than ever to discuss the issues. Not the case. And that is why having a white Republican president is best for the country.” That’s not a coherent line of reasoning to the conclusion that wanting a white president rather than a black one isn’t racist, in case you wondered.

Diagnosis: We’re reluctant to use the expression “Uncle Tom”, but Kevin Jackson is a racist. He is also a complete and utter moron. Fortunately, his impact is probably pretty limited. Still.
Posted by G.D. at 6:51 AM