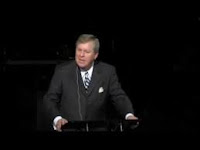 Dee Wampler is a Missouri-based attorney (or, for the moment, ex-attorney), writer and wingnut conspiracy theorist. He is probably most famous for his book The Myth of Separation between Church and State, a sort of poor man’s David Barton rant. The book takes as its point of departure the claim that “even a precursory glance at the first amendment easily shows it was meant to protect freedom of religion, not to protect government from religion,” which is a strange formulation of a claim no one would, if read quickly, disagree with. (As you’d expect the rather contrived distinction made in that claim gets twisted into the silliest conclusions in Wampler’s book.)

Wampler also featured in Truth in Action Ministries’ unhinged conspiracy flick “The Dumbing Down of America”, which set out to expose the “sinister” agenda of the public education system. In the movie, Wampler went ahead and blamed public education for “everything bad that is happening in our country today,” led by communist teachers who seek “the eradication of Christianity.” Otherwise, Wampler is a tireless warrior at the frontlines of the imaginary War on Christmas.

Diagnosis: Yes, that kind of guy. We can’t be bothered with too much detail here, insofar as it is easy to tell precisely where they’d be headed. Worth mentioning all the same, in case anyone stumbles across any of his very silly books.