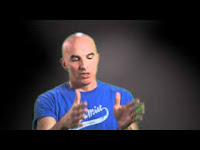 Michael Zezima, or Mickey Z., is a writer, editor, blogger and novelist who has contributed to numerous magazines and written several books, and who also appeared in Brian Kraft’s paranoid nonsense DVD The Fall of America and the Western World. The latter supposedly shows you “[h]ow to protect you and your loved ones from financial armageddon, government tyranny, the destruction of the middle class and the end of freedom,” and Zezima appeared together with luminaries such as Joseph Farah, David Icke, G. Edward Griffin and Alex Jones. Despite the company, Zezima is hardly rightwing, however; rather, Zezima is a radical and very, very angry and paranoid vegan activist.

Zezima’s primary target is the elites, but not only political and financial elites: Zezima takes anti-authoritarianism for a wild ride and rejects any authorities or expertise, including scientific expertise and, in particular, medical scientific expertise. Indeed, Zezima laments that many people skeptical of other authorities fail to “question, say, the need for humans with a functioning immune system to get vaccinations (laden with formaldehyde, mercury, aluminum, cells from sickened animals, and genetically-altered materials, no less)” (yes, it’s the usual antivaccine talking points and misunderstandings, refuted a thousand times) – or that people with sufficiently healthy skepticism to not “even think there were humans on the planes that hit the World Trade Center” don’t have have any problem with genetic modification.

But not only is Zezima antivaccine and anti-GMO; he rejects more or less all of “Western medicine” and laments the lackluster support for “alternative therapies” promoted by Big Alternative that demonstrably don’t work. And of course, once you’re down the rabbit hole it’s hard to stop. Other things Zezima promotes include the imaginary dangers of water fluoridation and amalgam fillings and, not the least, the “electro-magnetic radiation in our cell phones” that those who understand how things work claim to be safe and which therefore, since they are actually authorities on the issue, must be some sort of conspiracy.

Zezima is, however, probably best known for being a relatively major figure in the HIV/AIDS denialism movement; no, he doesn’t actually know anything about anything remotely related to the topic (something that, to Zezima, appears to make one more trustworthy on a topic), but a movement like the HIV/AIDS denial movement will take any ally they can get.

Diagnosis: Actually a good example of how some people fail to distinguish being skeptical from denialism. It is, admittedly, somewhat hard to gauge his actual influence, but he tends to show up in the strangest places.