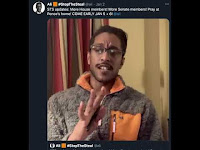 Most famous for being one of the central organizers of Stop the Steal, a campaign to promote the conspiracy theory that widespread voter fraud led to Biden’s victory over Trump in the 2020 election, Ali Alexander is a wingnut activist, convicted felon (felony property theft and credit card abuse charges from 2007 and 2008), conspiracy theorist and social media personality. The goal of Stop the Steal was to try, by any means necessary – including violence – to prevent democratic processes from taking place when people voted for someone other than the candidate Alexander favored: Alexander and his team fought for instance to “force” battleground states to subvert the will of the people and send Republican electors to the electoral college​ to to cast votes for Trump, even if they hailed from states that were won by Biden.

Alexander founded the Stop the Steal campaign in 2020 to promote conspiracy theories, and has organized large rallies in D.C. to protest the results of the election, sometimes feuding with other organizers over who should be given credit for the efforts, and has solicited donations online to fund the events. (Despite Trump’s support for Alexanderand his efforts, “Stop the Steal” wasn’t officially part of the MAGA campaign, however, and the contributions solicited by Alexander’s website aren’t bound by nonprofit rules – at least initially, the contributions went straight to him.) Among his biggest “successes” was the November 2020 Million MAGA march, but Alexander was, importantly, also one of the people who encouraged dingbat Trump supporters to rally outside the Capitol building on January 6, 2021, naming that rally the “Wild Protest” and (reportedly) encouraging attendees not to wear masks. Already in December, Alexander wrote, in a Parler post, that “[i]f D.C. escalates ... so do we”, and he was, unsurprisingly, among the people active in inciting the crowd outside the Capitol, leading chants of “Victory or death” in front of a sign declaring “MARTIAL LAW NOW” and saying that Stop the Steal activists were starting “a rebellion against the Deep State” (i.e. against democratic processes and any checks on the powers of the president). In the aftermath of the attack on the Capitol, Alexander desperately tried to backtrack, took down his website and went into hiding. Meanwhile, Twitter banned his personal account and a Stop the Steal account, and he was apparently also banned fromPayPal and Venmo. Being in hiding hasn’t prevented him from issuing pleas for contributions, e.g. to fund his security detail – apparently part of the cost is driven by him being targeted by the supernatural: “Witches and wiccans are putting hexes and curses on us,” claims Alexander.

Two weeks before the Capitol raid, Alexander had said that his group wasn’t violent – “yet”, and promptly went on to use “yet” as a code word for violence, for instance when he told a Phoenix audience of mostly mouth breathers and neo-nazi supporters that “we’re going to convince them to not certify the vote on January 6 by marching hundreds of thousands, if not millions of patriots, to sit their butts in D.C. and close that city down, right? And if we have to explore options after that…‘yet.’ Yet!” His cheering supporters also yelled threats like “noose!” and “nothing’s off the table!” Meanwhile, Alexander also received ample criticism from people who otherwise often agree with him when he encouraged voters to boycott the 2021 Georgia Senate runoff election.

Among the conspiracy theories that Alexander has promoted as part of the Stop the Steal campaign is the silly claim, dubbed “#Maidengate”, that people had used their maiden names to vote more than once.

Alexander were, however, noticed for his conspiracy theories (there are plenty) also prior to Stop the Steal. In 2019, for instance, he received some attention for his birther-inspired campaign against Kamala Harris, tweeting that Harris was “not an American Black” and that “I’m so sick of people robbing American Blacks (like myself) of our history. It’s disgusting”. (Donald Trump Jr. retweeted the claim, then deleted it.) The same year, he arranged for himself and fellow conspiracy theorists Jacob Wohl and Laura Loomer to travel to Minneapolis to film an online documentary, Importing Ilhan, in which they purported to investigate the debunked conspiracy theory that Ilhan Omar had married her brother to grant him U.S. citizenship.

Alexander is frequently seen wearing orange clothes, because, according to himself, God has given him a message that the color had special significance for 2020: “God gave me the color orange in December 2019. He told me ‘orange would be the color of 2020.’ I've come to learn it means GOD’S POWER.” He has also declared that Stop the Steal is “a spiritual movement.”

Though we keep this entry relatively short, there is an excellent portrait of Alexander, his background and his connections and position on the right here. Strongly recommended.

Diagnosis: Silly conspiracy theorist, but also a demonstrably dangerous, committed fascist. Alexander has enjoyed a not-insignificant social media presence and a large number of followers, and he is certainly willing and able to whip such knuckle-draggers into paranoid, wild frenzies. Dangerous.