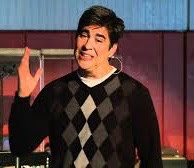 Christopher Grace is a professor of psychology at Biola University, a fundamentalist institution that, despite being fully accredited, has a history of not always being very appreciative of science, truth, evidence or decency. Grace is also the director of Biola University’s Center for Marriage and Relationships, which does not appear to the kind of center that would help Biola escape its aforementioned reputation. The center is not particularly concerned with the scientific qualities of its inquiries. And Grace’s own credentials as a scientist are not exactly of the kind that would obviously impress real scientists – yes, he has a publication record, ostensibly in ”the field of psychology”, but publications in “the field of psychology” in magazines and journals such as Journal of Theology and Psychology or Theology, Marriage and Family: A Christian Journal don’t really count.

Several of his publications in these magazines concern evolutionary psychology and intelligent design, and Grace appears to be one of the founders of what he calls “intelligent design psychology,” which is apparently supposed to be an alternative poised to displace evolutionary psychology. We admit that we haven’t bothered to consult his “scientific” output. Grace is a signatory to the Discovery Institute’s petition A Scientific Dissent from Darwinism, so his appreciation for science and taking a scientific approach to his studies of reality is evidently poor.

Diagnosis: Another pseudoscientist working at an institution that likes to pretend to be a scientific one. As such he probably deserves a mention, though he seems to be a small fish.
Posted by G.D. at 4:14 AM