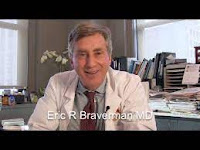 Eric R. Braverman is the founder and director of PATH Medical, a clinic that ostensibly focuses on “brain health”, as well as founder and president of PATH Foundation NY and – at least formerly – Total Health Nutrients, LLC, a dietary supplements online shop and promoter. Though he is, indeed, an MD, Braverman is heavily into the branch of quackery known as orthomolecular medicine, and advocates dropping medicines in favor of untested nonsense he conveniently happens to sell, in particular large doses of nutrients for treating schizophrenia and other illnesses – Braverman has described himself as “one of the foremost experts on the integration of conventional and alternative medicine.” He is also a self-declared rabbi and “certified in anti-aging medicine” by the American Board of Anti-Aging Medicine, which is not a serious medical board. Already back in 1987, Braverman co-authored a book, The Healing Nutrients Within, with quack legend Carl C. Pfeiffer, in which they advocated for what they called ‘Pfeiffer’s Law’: that “if a drug can be found to do the job of medical healing, a nutrient can be found to do the same job. When we understand how a drug works, we can imitate its action with one of the nutrients.” The claim is deranged bullshit. There is a good portrait of Braverman here.

PATH’s claims for itself are, shall we say, not exactly modest. Apparently, PATH “treat[s] causes, not symptoms,” a familiar quack phrase that should raise all the red flags there are. And the range of conditions they promise to cure include everything from Alzheimers through allergies, blurred vision, fat craving, insomnia, arthritis, dry cough, chest pains, hear issues and Parkinson’s, to cold/clammy hands, tinnitus and weight gain – all being “deficiency symptoms” that can be treated through “natural approaches” (including supplements). It should be needless to say that the claims are bullshit and based on guesswork, useless diagnostic tests and pseudoscience. Their website does for instance offer a free “Brain Deficiency Quiz” claimed to relate common symptoms to neurotransmitter deficiencies that can ostensibly be corrected with supplements. They are understandably unclear about how this test has been validated. Though Braverman’s CV lists a number of papers, mostly in bottom-feeding journals, there is predictably a striking shortage of outcome studies on his “natural treatment approaches” to back up any of the ambitious health claims he is making.

Commercially, PATH Medical seems to be sustained largely through conducting expensive and scientifically unsupportable tests and assessments, including BEAM testing, head-to-toe ultrasounds, a neuromuscular-skeletal review, and they test more than 250 “medical and aging markers”. We suspect that if you are already willing to shell out up to 100,000 dollars, Braverman and his team will find something wrong that they can ‘cure’. BEAM testing (or qEEG), for instance, has few medically accepted uses, and Braverman’s claim go far beyond uses that have even been suggested by mainstream researchers, much less by the evidence. But it’s fancy; we’ll grant him that.

Even the team at PATH should raise suspicions, as it features people like John Pillepich, a “Ph.D. in holistic nutrition” from Clayton College of Natural Medicine, a now-defunct unaccredited diploma mill, who also served as “chief science advisor” for Total Health Nutrients.

Needless to say, Braverman and PATH has had some conflicts with medical boards, as well as with the New York Attorney General for their marketing and billing practices (especially misleading patients into thinking that their nonsense woo would be covered by insurance).

His books include The Amazing Way to Reverse Heart Disease Naturally: Beyond the Hypertension Hype: Why Drugs Are Not the Answer (with Dasha Braverman) and a big pile of garbage on how to reverse aging.

Diagnosis: Yet another one, and Braverman is glitzier and fancier and more professional-looking than most. Given that people are understandably concerned about health, his nonsense will surely continue to ensnare a significant number victims, and we are sure that many of them will sing PATH’s praises afterwards – after all, when you’ve spent 10,000 dollars to cure something that the people offering you the cure convinced you that you were suffering from, you are not going to want to find out that you got conned.