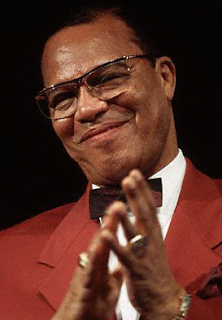 Louis Farrakhan is the leader of the Nation of Islam, a radical African-American religious, political and social movement, and is, in effect, a left-oriented, Muslim counterpart to Pat Robertson.

He is known for making anti-Semitic remarks: “I recognized that the black man will never be free until we address the relationship between blacks and Jews.” – make that “Satanic” jews. More here. And you know, it is all really about the Illuminati – it’s no coincidence that the B’nai B’rith and FBI were both formed in 1913. Oh, and he also got ties to the Reverend Moon.

He also recently jumped on the vaccine hysteria bandwagon, claiming that the H1N1 vaccine was really a part of a fascist plan to kill off people in order to ease overpopulation.

He is a staunch supporter of Robert Mugabe, and believes that the U.S. government deliberately demolished a levee following Hurricane Katrina in an effort to force black people out of New Orleans. It doesn’t obviously cohere with his assertion that the hurricane was “God's way of punishing America for its warmongering and racism”, but whatever – coherence is no criterion for these people.

Diagnosis: Unhinged conspiracy theorist and general loon. He has, undoubtedly, quite enormous influence, but it baffles us that liberals are still writing excuses for him. This guy is crazy, and he is vile.
Posted by chaospet at 4:09 PM