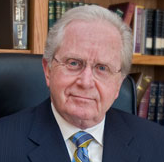 Flurry is the founder and Pastor General of the Philadelphia Church of God (PCG; (visit the website here), based in Edmond, Oklahoma, and presenter of the television program The Key of David, editor in chief of The Philadelphia Trumpet magazine, and founder and chancellor of Herbert W. Armstrong College in Edmond, Oklahoma. It is taught within his church that Flurry is That Prophet, a divinely appointed successor to Herbert W. Armstrong, akin to Elisha after Elijah. Or something.

In his magazine Flurry writes an article in each issue detailing how America is falling apart because her youth do not follow his interpretation of God's values. This includes but is not limited to articles on how Universities undermine America's values: “American colleges and universities actually encourage people to indulge in SOME OF THE MOST REPUGNANT IMMORALITY IN THE HISTORY OF MAN! We lead the world to sexual immorality” (Flurry is a fan of random capitalization). Sexual interaction between consenting individuals at universities represent “SOME OF THE MOST IMMORAL ACTS IN HUMAN HISTORY”, right after the invention of science. In short, sex is the cause of the downfall of America.

Apparently, God was also responsible for the Haiti earthquake because the people there weren’t Christian enough – if you think of it, Flurry is actually a couple of notches more insane than Pat Robertson, though less influential. Oh, and Germany is ruled by the Nazis – that is, the old Nazis, since they survived WWII and are still running shop, apparently (visit the website here). He is really scared of Germany.

He also publishes “Malachi's Message to God’s Church Today” and distribute it to as many Worldwide Church of God (Armstrong’s original churcn, which Flurry broke away from and apparently thinks is the devil) members as possible. According to Flurry, Malachi's Message is the “little book” of Revelation 10, a part of Revelation hidden by God until 1989.

Members of PCG are not allowed to associate with heathens (especially not members of the Worlwide Church of God), and there is a requirement is for Armstrong College students to remove themselves from all social networking sites, especially Facebook and My Space, because they risk coming in touch with heathens there. All of Flurry’s sermons are distributed locally on CDs which are subsequently destroyed after everyone has heard them (you are not supposed to listen to them twice; (this is a website for a competing sect, apparently)).

Notorious members of PCG include Dennis Leap and Andrew Locher.

Diagnosis: Yet another clinically insane Messiah-wannabe cultmaster (PCG is a small cult empire, in fact); he has a fair share of followers, actually, though his impact is minimal beyond those. Stay far, far away from this guy. Lots of people in Internet discussions seem to agree that he is mad, mostly for the wrong reasons.
Posted by chaospet at 1:53 PM