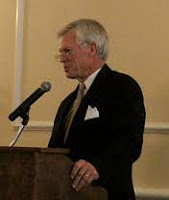 More state legislatures; this time it’s the South Carolina Senate, which is unfortunate enough to be saddled with Mike Fair (6th district). Fair, a resident of Greenville, has been serving since 1995, and as a hardcore religious fundamentalist he has been promoting things like abstinence-based sex education and proposed legislation mandating that sex education classes include information that homosexual behavior is “unnatural, unhealthy and illegal.” Yeah, accuracy isn’t his strong suit, but incorrectness is par for the course. In 2014 the South Carolina House voted to cut $70,000 from the budgets of two state universities to punish them for assigning books about LGBT people to students; Fair followed up by accusing one of the schools of gay “recruitment”.

But perhaps most importantly, Fair is a creationist who has achieved quite some notoriety for his long-standing efforts to have intelligent design creationism taught in public schools:

-       In 2003, he tried to amend a bill dealing with instructional materials and textbooks to require a disclaimer about the origin of life as “not scientifically verifiable”; failing that, he got support for establishing a committee to investigate the science standards regarding the teaching of the origin of species, determining whether there is a consensus on the definition of science, and whether alternatives to evolution should be offered in schools. He explicitly said his intention was to show that Intelligent Design was a viable alternative. The bill died, however, when the legislature adjourned.
-       He quickly bounced back, however, with numerous new efforts, including S.909, a bill modeled on the so-called Santorum amendment. If enacted, it would have required that “[w]here topics are taught that may generate controversy, such as biological evolution, the curriculum should help students to understand the full range of scientific views that exist, why such topics may generate controversy, and how scientific discoveries can profoundly affect society.” That one failed as well.
-       In 2005, he launched (together with Rep. Bob Walker, who sent a letter to the Board of Education claiming that it was “unanimous” that the evidence for evolution had been fabricated) a Discovery Institute-backed campaign against the treatment of evolution in the state’s science standards, once again pushing “critical analysis” language for the purpose of undermining the teaching of evolution. He didn’t get it, despite the backing of governor Mark Sanford, but claimed a victory for intelligent design nonetheless. As did the Discovery Institute, but they tend to claim victory no matter what happens.
-       In 2008 he introduced an “academic freedom” bill (S.B. 1383) that would have specifically allowed public school teachers to critique evolution in their classrooms (which died in committee).

And so on. In 2014, in particular, Fair was annoyed by the fact that a study done for the Fordham Foundation once again gave South Carolina an “A” for how well it teaches evolution, thus threatening South Carolina’s reputation as a backwards hole, we suppose, and pointed out that no one was there when life began to make a scientific observation about it (no, he doesn’t even …) and proposed, once again, that science books in South Carolina public schools should have the following statement posted in them: “The cause or causes of life are not scientifically verifiable. Therefore, empirical science cannot provide data about the beginning of life,” which has nothing to do with evolution but does reveal, yet again, a staggering lack of understanding of the scientific approach to questions (hint: hypotheses-testing by virtue of a hypothesis’s observable predictions: Claims about the past tend to predict certain observations now). Apparently the eye is also a serious objection to evolution, mostly because Fair can’t be bothered to, you know, consult the relevant literature.

At least Fair got support for his efforts from USC math professor Daniel Dix, a member of Bill Dembski’s International Society for Complexity, Information, and Design and a signatory to this, who appealed to incredulity and his lack of background in evolutionary biology to question evolution, and Joseph Henson, chairman emeritus of Bob Jones University’s division of natural science, who appealed to the Biblical Flood. The Board of Education once again ignored Fair’s concerns, however (also here); this one involving Fair and another SC legislature creationist, Kevin Bryant, is telling as well). But perhaps Fair used the aftermath to figure out why scientists reject his objections? Oh, yes. He returned later in 2014 after apparently doing some research to require that evolution should be taught as a theory, not a fact. So there. He also claimed that “the evolution controversy often comes down to understanding the difference between macro-evolution and micro-evolution” and that there are gaps in the fossil record – but of course, deep down, debates over topics in science are for Mike Fair really a debate over values. Here he shakes his fists at the courts.

Fair hasn’t restricted his lunatic antics to evolution, however. He has also referred to abortions as our nation’s holocaust – in response to a poll of three Senate districts, showing that a majority of respondents to the poll said they support access to abortion at 20 weeks after they were told that such abortions are rare and often involve fetal abnormalities; Fair effectively said that he didn’t trust the poll because he didn’t like the results.

Diagnosis: Plenty of gohmerts in the state legislatures, but Mike Fair is still an exceptional specimen. Anti-science, anti-reason, and anti-accuracy to the core, he hasn’t had much success thus far; he does, however, remain in a position of power, a fact that does not reflect well on the people of South Carolina’s 6th district.
Posted by G.D. at 3:05 AM