Honorable mention to Brooks Bayne for his fantastically weird, but ominous Sandra Fluke conspiracy theory involving both Jews and Obamacare and persecution of True Christians. But there is too little evidence of significance. Nor will we provide a separate entry to Kaye Beach, who in 2013 sued the state of Oklahoma, claiming that it’s a violation of her religious freedom to require her to get a driver’s license because the license is the Mark of the Beast (we haven’t really monitored subsequent developments). 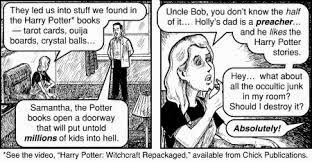 Lindy Beam is a staff person at Focus on the Family, which makes her at least part of a movement with some influence. While not a leading figure, at least she drew some attention to herself for weighing in on the debate over the evils of Harry Potter, pointing out that “The spiritual fault of Harry Potter is not so much that Rowling is playing to dark supernatural powers, but that she doesn't acknowledge any supernatural powers at all. These stories are not fueled by witchcraft, but by secularism.” Clearly such books are unsuitable for children or, indeed, anyone. But Beam is also concerned that the books might lead children to become interested in the charms and spells and later explore witchcraft and the occult – an activity which “is neither harmless nor imaginary.”

Diagnosis: Although by no means close to the most insane fundie reaction to kid’s literature (see illustration) Beam’s conclusion is, in fact, hysterically crazy. Have some perspective. And seriously: Being affiliated with Focus on the Family should really be enough.
Posted by G.D. at 10:12 AM