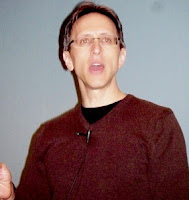 The Robert Scott Bell show is a lunatic altmed conspiracy podcast on on the lunatic fringe “Republic Broadcasting Network”. The podcast is characterized by conspiracy theories that would make even the whale.to audience pause (well, not really) and the misuse of technical terminology to make incoherent rants on medicine sound plausible to those without any knowledge of medicine or physiology or command of the vocabulary whatsoever. Bell is a proponent of a range of quackery and crackpottery, from homeopathy to colloidal silver (to treat autism, no less), and a range of denialist positions, from anti-vaccination to HIV denialism. Apparently his claims have sounded sufficiently impressive to the reality-challenged for him to be given space and time e.g. at the quackfest Autism One. Mike Adams is a fan; Adams is also a fan of David Icke. (In fact, Adams shared his by now infamous McNugget of comical gold on Bell’s show).

We are not going to discuss the extent of Bell’s ridiculousness, but take his and one April Boden’s discussion of the HPV vaccine as an example of the style and content. Apparently HPV is a harmless virus that does not cause cervical cancer at all. Indeed, like most “viruses” the HPV is “expressed under cellular stress,” and is suppressed or made completely inactive in a healthy, well-regulated cell. So, cells which are nurtured and fed essential nutrients, like essential fatty acids, selenium and glutathione regularly stop the expression of “viruses.” Cells “which are dysregulated, starved for nutrients and intoxicated by chemicals, pesticides, heavy metals and neurotoxins often express viruses.” (You don’t need much background in medicine to recognize this as a word salad.) So why, then, does government recommend the HPV vaccine? Well, the truth is, apparently, that “California [the rant was broadcast when HPV was introduced there] is broke, and in order to make up its endless budget shortfall, it is selling its children into pharmaceutical slavery. Yes, it’s a conspiracy, just like HIV – not a fatal disease, according to the show, but an excuse to distribute lethal drugs like AZT to kill off parts of the population to save money. Yup, that’s reality as they see it over at Robert Scott Bell’s show.

And when Jon Stewart criticized anti-vaccine conspiracy theories, Bell didn’t take itlightly. According to Bell, Stewart is a “Nazi” waging war on “all of us who believe in health freedom and healing liberty,” and “he’s ready to take us out and put us in concentration camps,” since everyone who disagrees with Bell obviously and by default want to commit genocide.

Diagnosis: Hysterically insane, fuming, incoherently babbling tinfoil hatter. Now, Bell is apparently fringe even for the fringe, so his impact is presumably somewhat limited. Still.
Posted by G.D. at 10:01 AM