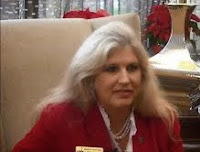 You remember the Texas Board of Education, of course. In their creationist heydays, various nationally famous denialists and local lunatics would both launch attacks on biology, physics and history in manners that would draw national and even international attention, but the side of science generally won out in the end. When the State Board of Education‘s public hearing on new science textbooks for Texas public schools finally began in 2013, the creationists were unable to mount any serious attacks anymore. So all looked well for a while – until it became clear that oil and gas industry interests had instead decided to attack the only environmental science textbook up for adoption by the state board.

So during the hearings Becky Berger, who identified herself a geologist and oil and gas professional, tried to argue that high schools shouldn’t teach environmental science classes at all. And during the hearings she launched a rabid attack on the environmental science textbook under consideration, claiming that it is filled with factual errors on topics like pollution potentially caused by fracking and the problem of carbon emissions. The attack was somewhat weakened by the fact that she provided no actual written documentation to back up her claims, and failed to even produce a list of the alleged errors so that the publisher could respond to her claims. Her attacks are discussed in some detail here.

The state’s official review teams had not identified any factual errors in the textbook. Nevertheless, some board members thought that Berger (who had not been part of the review process) was more credible. Of course, Berger somehow didn’t remember to tell the board that she is a Republican candidate for the Texas Railroad Commission, which regulates the state’s oil and gas industry, information that would have been strangely relevant.

She wasn’t alone. Throughout the day of the hearings, various wingnut activists and websites had been urging “grassroots” to call on the state board to reject the science textbooks up for adoption, especially the environmental science textbook. Honorable mention to Alice Linahan of the for-profit political outfit Voices Empower, who argued that the textbooks were a threat to Texas’ oil/natural gas industry.

Diagnosis: Denialist wingnut. Yes, another one, and Berger is not afraid to use subversion and trickery to get her way.
Posted by G.D. at 10:03 AM