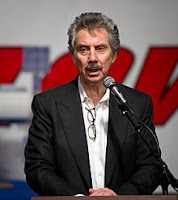 We’re a bit unsure about this one, but we suppose he’s worth a mention. Robert Bigelow is a hotel and aerospace entrepreneur; in particular, he is the owner of the hotel chain Budget Suites of America and the founder of Bigelow Aerospace, the latter of which is particularly known for launching two experimental space modules, Genesis I and Genesis II, and for their plans for full-scale manned space habitats to be used as orbital hotels, research labs and factories. Bigelow is currently building the BEAM module for launch to the International Space Station, with launch planned for 2015 on the eighth SpaceX cargo resupply mission.

Indeed, Bigelow has done quite a bit for science, including funding for plenty of valuable research. However, Bigelow also has a penchant for pseudoscience and bullshit, and much of his money have gone into research (not particularly scientific) on alien abductions, cattle mutilations and suchlike. Indeed, Bigelow himself is president and founder of the National Institute for Discovery Science, which focuses on precisely the phenomena mentioned, and in the course of realizing his space adventure dreams he has contracted MUFON with potentially very large sums of money for the pursuit of first-hand UFO information. Indeed, longtime UFO activist Ed Komarek has suggested that Bigelow’s goal is nothing less than an “alien reengineering project.” Bigelow’s proposal, at least, is to generously fund the efforts of MUFON investigators to enable them to respond quickly to alleged UFO incidents, contracting plenty of scientists to investigate the claims and so on.

But why does it matter that Bigelow spends his money on whatever bullshit he might fancy? For one thing, it (obviously) ties up resources that could have been used infinitely better; elsewhere moreover, such efforts tend to result in lending a sheen of legitimacy to the crazy, as for instance in the case of the Robert Bigelow’s endowed Chair of Consciousness Studies at the University of Nevada at Las Vegas, the goal of which was to teach courses on such subjects as dreams, meditation, hypnosis, out-of-body experiences, telepathy, and drug-induced altered states of consciousness. Bigelow pulled the plug on the program in 2002, but during its existence it did much to promote the pseudoscience of its directors, parapsychologist Charles Tart and later Raymond Moody, who surely have done quite a bit to popularize this kind of cargo cult science. Now, it is not entirely clear why the program was axed, but perhaps Bigelow came to realize that it produced nothing of scientific value whatsoever?

Diagnosis: I am reluctant to accuse Bigelow of being an outright loon, and there is little doubt that he has made many positive contributions to science and civilization. But he has also done a bit to facilitate the promulgation of ridiculous pseudoscience – and at least the effort to give such pseudoscience a sheen of legitimacy – and although his negative contributions may not outweigh his positive ones, he probably merits a mention.
Posted by G.D. at 11:48 AM