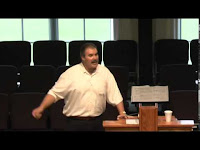 We’ve covered a respectable number of anti-gay nutters here, but Paul Blair still manages to impress, with a deranged lack of insight and critical thinking skills to challenge the worst. Blair is pastor of Fairview Baptist Church in Edmond, Oklahoma, a 2011 candidate for the Oklahoma State Senate, and rabid, long-standing anti-equality activist (though he tried, in 2011, to portray himself as someone who just happened to end up being opposed to Oklahoma’s legislation supporting anti-discrimination measures and subsequently receiving death and bomb threats from gays, Blair has been involved for a long time).

Blair is a close ally of Rep. Sally Kern, and a speaker at the “Rally for Sally” where he showed support for her after she said that gays represent a bigger threat to America than terrorism (since gay rights made Kern a victim, of course). He is the founder of Reclaiming Oklahoma for Christ, head of the Reclaiming America For Christ organization, and a participant in what was officially an anti-hate crimes “Rally for Religious Freedom” where anti-gay activists vowed never to stop fighting homosexuality and challenged the Justice Department to prosecute them. Indeed, Blair and his organization is behind a video called “The Criminalization of Christianity” in which he warns that hate crimes legislation (“Pedophile Protection Act”, according to Blair) would “make it possible for a pastor to be prosecuted for doing nothing more than preaching a Biblical sermon on Sunday”.

Yup, a standard, hardcore Liar-for-Jesus, who doesn’t think twice about lying through his teeth to his congregation if that can garner him support for his hatred of homosexuals. According to Blair, equal rights is persecution of Christians, but I don’t think he even believes that himself. You can probably imagine his reaction when the courts struck down Oklahoma’s ban on same-sex marriage, but the details are still fascinatingly lunatic: Blair called on state government officials to defy federal court rulings on issues like marriage, and that they could do this because “the republic is officially dead” as a result of overreaching government officials and judges  – according to Blair the courts “have no authority” to strike down unconstitutional state laws. Yes, Blair only understands the Constitution when it suits him.

And according to Blair American “culture is under attack” as “we’ve gone from True Grit to Brokeback Mountain,” and it is “the Devil” who is leading the attack on the “realms of the home and the church” through the government, and marriage equality is apparently his tool. Ineed, if you advocate secularism or gay rights, you’re a minion of Satan, says Blair, and gay rights will bring about communist, Satanic dominion (it’s a conspiracy). And the fight against equality is, according to Blair, just like the fights against slavery and Hitler, since not allowing Christians to discriminate against gay people is just like enslaving an entire race of people and committing genocide. Good to have people like Blair to put things in a proper perspective.

Diagnosis: The Platonic idea of a liar for Jesus, Blair cares little about truth, accuracy or reason; instead he’ll use whatever insanity, lie or misrepresentation he can to further his hate-based agenda. A repugnant excuse for a human being, in other words.
Posted by G.D. at 8:10 AM