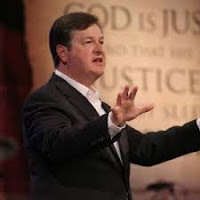 More wingnuttery. Thing is, the Family Research Council does actually have a Vice President of Church Ministries, and you can probably guess that it would be someone manically insane. Kenyn Cureton believes that “demonized forces of hell” are behind the “homosexual agenda”. (“Who do you think is ultimately behind the efforts to advance the radical homosexual agenda, indoctrinate our children, and ruin our military, now?”). Accordingly, Cureton is out to save gays from the slavery imposed upon them by Satan. Meanwhile, studies suggesting that “homosexuals” are born that way are dismissed as little more than Nazi propaganda – such studies have been “predominantly conducted by researchers who are homosexuals” and who “essentially practice Joseph Goebel’s [sic] Nazi philosophy of propaganda”. Got them there, Kenyn.

In response, Cureton has suggested that we might have to use armed resistance against the government to prevent same-sex marriage. And it will not only be “a great spiritual war with the forces of evil directed by the prince of darkness himself” where God is coming to “wage war on evil with a sword flashing out of his mouth”, it seems, but a real, physical one. According to Cureton, God has intervened directly in American history before.

But then, Cureton has an interesting perspective of American history. His response to the point that Columbus committed genocide and enslaved native people to force them to search for gold is that Columbus had good intentions since he was trying to find gold to fund a potential war with Muslims over control of Jerusalem and spread the Gospel to indigenous peoples; also he only enslaved native peoples instead of killing them because he was a merciful leader. The reason why some people dislike Columbus, then, is because he was a Christian, and criticism of Columbus is just another example of the rampant persecution Christians are facing in America today.

Diagnosis: Well, at least he’s not afraid to use colorful rhetoric … it’s really not easy to find much positive to say about Kenyn Cureton. And this guy really is a central figure in the anti-gay movement.
Posted by G.D. at 3:56 AM