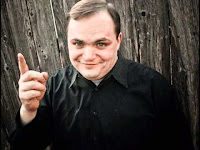 Steve Deace is a relatively influential Religious Right leader and talk show host based in Iowa – he’s influential enough that his show has become something of a required stop for GOP presidential candidates. Deace is in particular concerned about what he perceives – like old, white men since before recorded history – as the decline of morality in his society. And that is all the fault of non-Christians and liberals, including communists, gays and Muslims, who appear to constitute a unified group of people who disagree with Deace and is therefore in a conspiracy to persecute him and fellow wingnuts who care about morality. The persecution is institutionalized. The public school system, for instance, is a deliberate and organized promoter of a “culture of death” (which is why it is partly to blame for the Sandy Hook massacre). Meanwhile, Muslims are apparently outbreeding Christians so that 20 million jihadis will be hunting down our children and grandchildren, according to Deace: The Duggars are really the last hope for Western civilization (!) (no, there’s not much civilization in Deace’s vision of Western civilization)

Much of his time is devoted to ranting about the evils of homosexuals, of course. According to Deace, the end of anti-sodomy laws has led to fascism in the US  (no, he wouldn’t know the meaning of “fascism”); indeed, the gay rights movement poses a greater threat to America than “jihadists” and is forcing Christians to “debate our very existence” in the US: “How is it that Christian business owners are now being compelled by government to do things their religion says is wrong?” asks Deace, neglecting to reflect on the reasons for why they have been compelled to do that for quite a while now. And in Deace’s mind the fact that he cannot use his religion to discriminate is not only religious discrimination against him, but ... exactly: fascism.

It is little surprise that he was upset that NBA player Jason Collins’s decision to come out as gay was warmly received by his fellow players and fans, and posted on his Facebook page that the story demonstrates “perfectly how indoctrinated an aspect of our culture has become.” He followed up by saying that gay rights supporters are, once again, “basically fascists” because they disagree with him (and disagreement = persecution), and with some anger over the fact that he is, entirely correctly, being labeled “intolerant”. Deace also recommended that Collins deserves to be at the very least beaten up for his behavior, presumably because of Collins’s “fascism” (Michael Sam’s decision to come out of the closet was possibly just a Benghazi distraction, however.) He has also suggested that Republican presidential candidate should at least be asked what they plan to do to protect Christians against the “rainbow jihad.”

More generally, Deace has claimed that for same-sex couples wanting to get married is like wanting to be able to fly, which suggests that he isn’t quite clear about what people fighting for marriage equality are actually fighting for. Here he and John Stemberger suggest that it is at least important to keep poor people poor so they don’t have time to become homosexuals.

You can see an excerpt of his discussion about civil rights with theocrat Michael Peroutka (!) here (neither of them understands what it is; but they reject the idea, and then they try to argue that MLK was on their side). They also compared gay marriage to bank robbery and argued that Jesus would discriminate against gays. Here is Deace bringing on a white supremacist to his talkshow to talk about Ferguson, Obama and civil rights.

As for gender equality, Deace has raised the age-old question of why, if feminists hate men so much, do they want to be like them (his guest at the time, Suzanne Venker, agreed that this was a great mystery). Here is Steve Deace on transgender issues.

He has, of course, also weighed in on the Kim Davis affair, linking it to 9/11. That’s right. If the U.S. had responded to 9/11 appropriately, then Planned Parenthood would be out of business and the Supreme Court would never have been allowed to “usurp our God-given claim on true liberty” in its marriage equality ruling, with the detention of Davis being proof that the U.S. has abandoned the beliefs of the nation’s founders and adopted “pagan justice” (the same as “fascism”, presumably) instead of what he imagines the Constitution to do. His only comfort at present is apparently that Davis’s critics will go to Hell.

With Gregg Jackson, Deace is the co-author of We Won’t Get Fooled Again: Where the Christian Right Went Wrong and How to Make America Right Again, which argues that the Religious Right has a long story of supporting the Republican Party only to be betrayed by them. Betrayals they have in mind include Ann Coulter joining the board of GOProud, former RNC Chairman Ken Mehlman coming out as gay, and George W. Bush admitting that he was not a Biblical literalist. Persecution, no less!

Diagnosis: As stupid as he’s evil. But lots of people apparently admire that combo. Dangerous.
Posted by G.D. at 3:53 AM