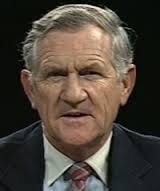 William Edwin Dannemeyer is a former U.S. Representative from California’s 39th district (Orange County) 1979-1993, and currently honorary national chairman of Citizens For a Better America. He is also one of the most delusionally insane people – arguably the winner – to have graced the U.S. Congress during the latter half of the twentieth century, and that is quite a feat. Dannemeyer is particularly notable for his profound opposition to the separation of church and state (or promoting “easing” the separation of church and state – his church, that is), firm commitment to creationism, hatred for homosexuals, and whale.to-style conspiracy theories, especially anti-semitic ones.

As a creationist, Dannemeyer has a history of attempting to block federal funding of evolution-related exhibits at the Smithsonian Institution (it promotes “the religion of secular humanism”), as well as a long list of bills attempting to get creationism into public schools as well as semi-enforced school prayers. As an anti-gay activist, Dannemeyer is particularly famous for reading a graphic description of things gay people (and apparently only gay people) “do” to Congress in 1989. He also wrote a book Shadow in the Land: Homosexuality in America as an attack on the gay movement. His proposals to stop the emerging AIDS epidemic in the late 1980s included banning HIV-positive immigrants and enforcing mandatory quarantines for people with AIDS – all in the name of freedom (those AIDS people were probably all homosexuals anyways). In 1985, he advocated barring persons with AIDS from working in the healthcare industry, stating that there was already “a requirement that nurses who are AIDS victims not work in maternity [wards] because a person with AIDS emits a spore that has been known to cause birth defects.” (Yeah, it’s a bit unclear where he got that information; he said he would be “glad to track down” the sources, but no on ever heard anything more.)

As a conspiracy theorist Dannemeyer has in particular promoted the Clinton kill list conspiracy, the idea that the Clinton administration secretly eliminated their opponents and anyone else aware of their evil natures. In 1994, in a letter to congressional leaders, Dannemeyer listed 24 people with some connection to then-President Clinton who had died “under other than natural circumstances” and called for hearings on the matter. Throughout the 90s his criticisms became more and more dysfunctional (they were, however, heavily promoted by Linda Thompson).

In September 2006, Dannemeyer sent a letter to the California Attorney General and other officials arguing that Laci Peterson had been killed by members of a Satanic cult, not by Scott Peterson. Heck, Dannemeyer believes that Jews are trying to take over the world in order to commit genocide against Christians. According to his website, “[t]he main goal of the Zionist Jews and their New World Order is exactly the same as it was when Jesus was on earth – to exterminate Christ – and His followers!” The information seems to be more or less copied and pasted from documents in circulation in the 1930s. And those Jews are succeeding; for instance: “[T]he establishment of Education Day [!] in the United States [in 1991] will be claimed by the proponents of this Resolution as the establishment of a law by which a Christian who worships Jesus Christ will be charged with idolatry and decapitated.” No less. You can read the reasoning here, but it won’t obviously help, since it resembles a whale.to article in style as well as content.

He is currently married to Lorraine Day, which may explain some things.

Diagnosis: Your standard David Icke-forum conspiracy theorist; hysterical, fanatic and incoherent. What distinguishes Dannemeyer is the fact that he got himself elected – and reelected – to Congress. He is probably relatively neutralized and marginalized by now, but still.
Posted by G.D. at 2:40 AM