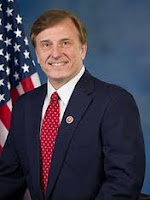 John Calvin Fleming, Jr. is a U.S. Representative for Louisiana’s 4th congressional district since 2009 and John-Birch-society-style conspiracy theorist. In particular, Fleming thinks that the United Nations is in a conspiracy against America. The global UN Arms Trade Treaty, which will restrict the sale of arms to countries and groups that commit war crimes and other atrocities, is by Fleming for instance interpreted as an attempt by the left to weaken and ultimately “repeal” the Second Amendment. He also cited discredited rightwing conspiracies concerning the treaty to support his claims, and concluded by speculating that the UN may make it illegal for parents to spank their children. And the UN is in cohorts with libruls, who are using immigrants (who according to Fleming are coming to America to “enjoy free healthcare” and “enjoy welfare”) as part of a “grand plan for the Democrat [sic] Party to make this nation into a single party state” and thereby institute tyranny. One of the most important means they have is to make it easier to commit voter fraud, and Democrats are deliberately using immigrants who are ineligible to vote to gain power: “We know they come from cultures that look to government for solutions and so the Democrat [sic] Party knows this and they know that if they can’t win elections using American citizens, this is a good way to go around that.” Obamais also fomenting racial tensions, apparently, in order to divide America. And yes, Fleming does have power. He is in Congress.

Most importantly, however, there is an atheist conspiracy to persecute Christians in the US. And there really are concerted efforts by libruls to impose a Satanic atheist worldview on America in order to destroy it: “We have two competing world views here and there is no way that we can reach across the aisle – one is going to have to win. We are either going to go down the socialist road and become like western Europe and create, I guess really a godless society, an atheist society. Or we’re going to continue down the other pathway where we believe in freedom of speech, individual liberties and that we remain a Christian nation. So we’re going to have to win that battle.” And accordingly, any kind of attempt to compromise for the sake of the country is treason. In particular, Fleming has sponsored several bills to shut down religious freedom in the military (of course, Fleming claims they do the opposite, but that is because he interprets “religious freedom” as being the freedom of those who agree with him to shut down those who don’t.) Obama, on the other hand, doesn’t care or do anything about the persecution of Christians (well, he does something, but those are just “political move[s]”), but rather follows – you guessed it – the UN, which is not only doing nothing, but “have really done a lot to do just the opposite of that, that in fact they tend to propagate liberal ideas and climate change and these kind of things in the absence of what is really happening around the world,” namely Christian persecution.

Of course, the direct target of those religious freedom bills are gays, who according to Fleming are – with the deliberate support of the government – covertly pushing atheism and socialism. Fleming’s opposition to gay marriages rests on bigotry in part on his fear that the institution may be abused by people entering into sham gay marriages. As opposed to sham heterosexual marriages. Which Fleming admits exist, but sham gay marriages are worse. Why? Well, you know why: Because they would be sham gay marriages. Homosexuals, you know. Also, national security.

Another major point of interest for Fleming is the war on drugs, and he has offered some rather (ridiculously) silly arguments for why the war needs to continue, including think about “our beloved veterans”.

Fleming is also a supporter of hydraulic fracking, which is his prerogative. But some of his rather novel arguments are interesting, for instance his response to the question of whether fracking has caused any deaths or serious injury to humans by pointing out that the bankruptcy of Solyndra has “harmed more people” than hydraulic fracturing.

Diagnosis: Religious fanatic and conspiracy theorist. Just what certain morons think the US needs more of. Extremely dangerous.
Posted by G.D. at 3:50 AM