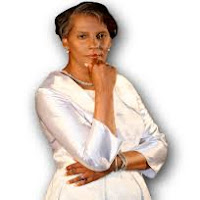 “The practice of homosexuality and self-pleasure, are age old systems, being recharged and reorganized for end-time warfare. It is being orchestrated from the diabolical realms of the supernatural and manifested on earth, with the overall intention, to silence the church forever. These actions, by satan, is (sic) an all out declaration of victory, as the church finds itself caught off guard and intertwined in his evil end-time warfare, strategies and systems.”

At least it would have caught the church “off guard” were Janice Fountaine not there to bring attention to the issue.

She was running for the New Independent Christian Party (with one Ralph Martino as co-chair), since “[t]he misrepresentation of the biblical teachings and principles to which we profess as Christians, prevent us from continuing to support either the Democratic or the Republican Party candidates.” They even had a foreign policy statement (“America is the world police, whether we like it or not”). She ended up, however, running for the GOP, who reportedly had some trouble finding suitable candidates in certain Maryland districts.

Fountaine is also the author of Why should I Wait, When God Said Go? Who’s Going To Get Gomer? (book and play), Realms and Dimensions of the Supernatural and The Apostolic Burden.

Diagnosis: With Louie Gohmert already in Congress, one can understand how some people might be curious to check what the limits on what drivel one may succeed in electing to positions of power might possibly be. Fountaine seems to have been a small step too far (in Maryland, at least), however.
Posted by G.D. at 5:03 AM