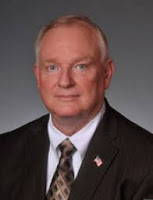 Jon Hubbard is a former member of the Arkansas House of Representatives (District 75 in Jonesboro). He is most famous, at least outside of Arkansas, for his 2009 book Letters to the Editor: Confessions of a Frustrated Conservative, which contains gems like this: “the institution of slavery that the black race has long believed to be an abomination upon its people may actually have been a blessing in disguise [because] the blacks who could endure those conditions and circumstances would someday be rewarded with citizenship in the greatest nation ever established upon the face of the Earth.” (The statement was endorsed by Bryan Fischer). The book – its publication coincided with the publication of his colleague Charles Fuqua’s book – also asserted that blacks don’t “appreciate the value of a good education”, and that in the future immigration, both legal and illegal, must lead to “planned wars or extermination” which would be “as necessary as eating and breathing”. Hubbard was not reelected in 2012.

He hasn’t mellowed down much, though, and has also later been caught raging and ranting about his efforts to save America from the “clutches of an obsessed, liberal-socialist-globalist agenda” and how “Obama has systematically gone about his primary objective to destroy America,” meaning, of course, promoting same-sex marriage and religious liberty for any other groups than those fundamentalists who coincidentally agree with Hubbard on political issues, which according to Hubbard were the ones for whom America was created.

Diagnosis: Belongs to a special kind of fuming, rightwing conspiracy theorist that seems notoriously populous among state legislators – Hubbard may be gone, but there are plenty left (also in Arkansas: We’ll return to a couple of examples later on).
Posted by G.D. at 3:28 AM