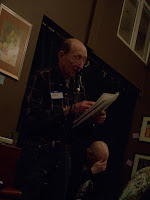 A crackpot of some note, Neil Huber is a Biblical literalist with a PhD in anthropology. He used to be associated with Wisconsin State University (though he can hardly be described as a particularly active scientist), but renounced science in 1990 and decided “to start with the assumption of the authority of the Bible, looking at all the evidence that it presents for trusting it. Then build your science from there, based upon the Bible’s truth.” He is currently affiliated with the Imago Dei Institute, a Bible college. Of course, given that he does, indeed, have a PhD, Huber is also a signatory to the Discovery Institute’s petition A Scientific Dissent From Darwinism, but at least he is pretty explicit that his rejection of evolution is not based on science. He is also on the CMI’s list of scientists alive today who accept the Biblical account of creation, even though he is not a scientist by a long shot.

There is a brief report from one of Huber’s presentations here (which also offers summaries of presentations by John Johnson, Tom Greene and Heinz Lycklama; the last, in particular, is a magnificent trainwreck). Huber tries, unsurprisingly, to run the “same-evidence; different interpretations” canard, neglecting to mention that creationists not only interpret the evidence differently according to their presuppositions but i) also just refuse to look at the vast majority of the evidence (the stuff that doesn’t fit), and ii) that science also tests its presuppositions. Actually, Huber tried to address one problem: the problem that different fossils are systematically and without exception found in different geological strata (because they lived at different times), which is hard to reconcile with the favorite creationist assumption that all fossils are remnants of creatures killed in one single cataclysmic flood. Well, Huber claimed that fossil animals are found at different strata in a particular order because they were running from the flood water, and so more primitive animals were not able to outrun more advanced ones. In other words, the moles outran the velociraptors and outflew the pterosaurs (not his examples). He didn’t mention plants.

Diagnosis: Amazing crackpot. Probably pretty harmless in the grand scheme of things.
Posted by G.D. at 2:51 AM