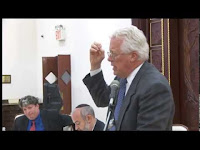 Paul G. Humber is the director of CR Ministries and author of things like 400+ Prophecies, Appearances, or Foreshadowings of Christ in the Tanakh and Evolution Exposed. Humber is, of course, a young-earth creationist, and has also penned articles for the Institute of Creation Research and Creation Matters, the newsletter of the Creation Research Society (both organization apparently put “Research” in their name since otherwise no one would ever have guessed that this is what they think they are doing).

Well, Humber’s writings on science contain the usual tropes, appeal to the Bible, obvious lack of expertise and rank denialism, and we’ll limit ourselves to an example: One obvious problem for young-earth creationists is radioactive decay, which rather clearly, uh, suggests that the Earth is somewhat older than they’d like to think. Their solution is of course to (completely out of the blue) assert that radioactive decay isn’t constant but happened much faster in the past. So here’s Humber:

“[C]onsider Deuteronomy 32:22 – ‘For a fire is kindled by My anger, and it burns to the depths of Sheol, devours the earth and its increase, and sets on fire the foundations of mountains.’ This verse may point us in the direction that radioactive decay is a physical manifestation of God’s anger against evil, affecting even biological life. Prior to the Noachian flood, mankind lived much longer. His lifespan has diminished substantially since the flood. Also, even though Noah might well have had some immature dinosaurs on the ark, their nearly total extinction following the flood seems obvious. This also holds with respect to many other animals that have become extinct.”

Or put differently: radioactive decay can’t be used to measure the age of anything, but is instead a measure of how angry God is at any moment. It’s hard to express how mind-boggling it is that anyone above the age of 7 can write this with a straight face and expect to be taken seriously (it’s at the level of “rain is angels relieving themselves”), but at least it entails that God is much less angry these days and accordingly unlikely to be overly concerned with gay marriage, abortion or transgender people using their bathroom of choice.

Here is Humber on Nebraska Man, an incident that really shows science working the way it should, but which to Humber is, irrationally, a reason to dismiss science in general if it doesn’t fit with what he has already convinced himself that he wants to believe.

Diagnosis: Oh, you silly duck. All the facepalms in the world wouldn’t reflect how crazy and silly Humber’s pseudoscientific babbling is, yet he is apparently viewed as an authority in certain quarters.
Posted by G.D. at 3:28 AM