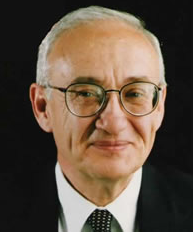 I know you are tired of these tired, old YECs, but this series is supposed to something of a reference work, so we will cover them. Chapman is one of the most over-the-top lunatic anti-evolutionists (blithering idiots) at the Discovery Institute. In fact, Chapman is the president of the Discovery Institute, and seems to believe that this position confers on him the power to pass judgment on science in a manner slightly reminiscent on the infallibility conferred on the pope when he’s helped up on the pope-throne the first time.

This one, an attack on Expelled Exposed (a project committed to exposing the dishonesty and stupidity of the Expelled movie) is a good example of his idiocy. It must be read to be believed (no, I am not going to generate traffic to DI, so I’m linking to a level-headed discussion of the article in question). Like most ID’ers, Chapman knows virtually nothing about evolutionary biology, and even less about the scientific method (not understanding, for instance, that science is done by experiment and evidence, not arguments, and that truth is discovered through careful, controlled research, not through attempts to sway public opinion; the article discussed here is astoundingly ironic).

Has among other things, argued at length that the Pope himself is the true victim in the recent, well, scandals involving the Catholic Church, and has argued (“ranted delusionally” is more appropriate) at length that the health care reform is unconstitutional. Apparently, his talents range wide; here is some financial advice, and here is his discovery that the earth is cooling rather than warming - yes, global warming is a leftist conspiracy carried aloft by the promise of … an endless flow of grant money, apparently. All of it is written with the sharp wit and overwhelming flashes of genius we’ve come to expect from Champan. And here is some plain old dishonesty and stupidity.

Diagnosis: Blathering idiot whose misapprehensions of what science is and how it works are simply to deep to be reversible in a lifetime. Has some power, and must be considered dangerous, despite the clownish appearance with respect to intellect.
Posted by chaospet at 12:35 PM