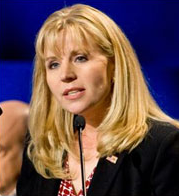 It might be a little unclear whether Dick Cheney, whatever else one might say about him, counts as a loon. Being vile, for instance (not explicitly saying that Dick is), isn’t enough. But he still manages to enter our encyclopedia through his daughter Liz. Liz founded, with Billy Kristol, the organization Keep America Stupid and Afraid (a.k.a. “Keep America Safe”), whose purpose is organizing vehement attacks on anyone who could conceivably be construed as questioning America’s war efforts – such as Amnesty.

Cheney is most famous for attacking the lawyers for the Gitmo detainees as being complicit in terrorism and allies of Al Qaeda. The way she did it resembles a Colbert parody in startling ways (guess Cheney is among the frighteningly large number of people who likes Colbert because they take his parodies as representing his true views). She’s been slammed pretty thoroughly for the whole affair, though - not that it has deterred her.

Diagnosis: Mad and malevolent wingnut; zealous. Her actions should, in any reasonable world, be sufficient to halt her political career permanently, but this might not be a reasonable world.
Posted by chaospet at 1:39 PM