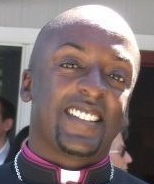 Council Nedd (not an alias) is a political, religious and cultural commentator who also serves as the Bishop of the Chesapeake and the Northeast in the Episcopal Missionary Church. He has undeniably done some good stuff for people in need, but he is also very much a loon. Nedd is the national chairman of the advocacy group “In God we trust”. Even if you’re not familiar with it, you kinda get the idea from the name. Nedd was, for instance, predictably outraged when the National Day of Prayer was found unconstitutional. Though he didn’t top the insanity of the Family Research Council, he did say that “prayer is never unconstitutional,” (which is kinda beside the point), and “... [t]o say the President of the United States cannot say a prayer [also beside the point], or lead the nation that elected him in prayer, is violating his first amendment rights ... I hope the President will stand up to his atheist allies and stand up for the American people by defending the National Day of Prayer ..." Ahh, the atheist conspiracy, which goes all the way to the top of the government. In fact, Nedd drives a pretty tough campaign to stir up anti-atheist bigotry. The atheists, you see “hate America and they are working with our nation's enemies to attack our heritage”, and national atheist organizations and left-wing legal groups are concentrating their efforts aimed at terrorizing Americans into not celebrating Christmas.
You do get a sense of the skewed observations of Nedd. When students at Boulder High School objected to being forced to recite the pledge of allegiance every day, partially because of the pledge’s religious content, Nedd didn’t only disagree but claimed that the objecting students should be punished because of their intolerance and offensiveness toward Christian students. Ordinary sane people can try to figure out what mixture of paranoia and madness is needed to fill in the hidden premises in Nedd’s “argument”.
When Obama met with the Secular Coalition for America, Nedd displayed his knee-jerk disposition to go into martyr-posture by “it is one thing for Administration to meet with groups of varying viewpoints, but it is quite another for a senior official to sit down with activists representing some of the most hate-filled, anti-religious groups in the nation.” (see here, and also here)
Diagnosis: Rabid, highly paranoid madman. Noteworthy impact.
Posted by chaospet at 10:57 AM