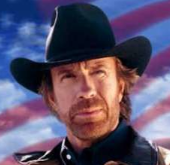 Some might at this point have expected creationism apologist and philosopher of religion and education Warren Nord. But Nord decided to take his ball and walk home in June 2010. And Misha Norland, who founded and runs the School of Homeopathy, is British.
Good ol’ Chuck Norris, however, is as American as born-again evangelicals and Walker Texas Ranger. In fact, Norris is both. In addition, Norris is an infomercial actor, a columnist for WorldNetDaily (and Creators Syndicate), an author of several incoherent religious books (“The Justice Riders”), and a political activist who has campaigned extensively for Mike Huckabee (and he has even endorsed Roy Moore). In 2009 he also announced on Glenn Beck that he might run for president of Texas. His WND screeds are remarkably incoherent and insane (and dishonest), even for Norris. At best, they bring quote-mining to a new level. It is therefore rather remarkable that he has been invited to provide a weekly column for Politico, but so it goes.
As an infomercial actor he has promoted fitness equipment, Bible study and prayer in public school. Norris (with his wife Gina) is on the board of directors of the National Council on Bible Curriculum in Public School, a branch of the Taliban that – you guessed it – campaigns to put the Bible on the curriculum of public schools. For Norris’s own take on “kicking and punching the Bible back into public schools”, see this. He works tirelessly to unmask the vast atheist conspiracy that exists and whose goal is to outlaw Christianity in the United States (and evil Obama’s primary goal is to take our guns away). The atheists have a lot of power: “Though the majority of Americans continue to claim to be Christians, a Gallup poll discovered 45 percent of us would support an atheist for president. Such a survey is a clear indication that the secularization of society is alive and well.” Clearly a result of atheist brainwashing. Norris has promised that if he were elected President he would “tattoo an American flag on the forehead of every atheist”, so that their secret powers are destroyed and it would be hard for them to work undercover in government etc. Similar measures have been used to identify and mark problematic minorities in society before, with some success (depending on how you see it). Admittedly, though, the atheists are only the second biggest threat to America, after illegal immigrants. There’s also a U.N.-grounded “world government” conspiracy, and to show his bipartisanship Norris has also run with some traditional granola hippie crankery, such as genetically modified organisms conspiracies and “health freedom” rhetoric. He’s even dug staunchly into antivaxx.
Norris is also a Biblical literalist and creationist. He is about as clueless as Ray Comfort. But can you guess what Norris thinks is to blame for the VT shootings?
Norris is a staunch opponent of gay rights and public schools condoning homosexuality. He was a champion of California’s Proposition 8 ban on same-sex marriage, and criticized the gay community for “interfering” with the democratic process (apparently by existing and having a stake in the outcome, as opposed to the Mormon church and the evangelicals in California who … well, the point should be intuitively clear if you have the intellectual abilities of Chuck Norris). If you wonder what his take is on abortion, and how he came to his position, you may look at this.
As an extension of his fitness advice, Norris has recently taken to passing out medical advice as well. The level of expertise displayed corresponds roughly to the level of expertise he displays in his discussions of evolution.
In 2008 he was the commencement speaker at LibertyUniversity, which is apt. And in 2010 he was given the title “Honorary Texas Ranger” by Texas Governor Rick Perry. That tells you more about Perry than about Norris.
“Chuck Norris facts” are not funny.
Diagnosis: Dense as a rock, but surprisingly dangerous (not because of his martial arts skills), Norris seems hell-bent to be wrong on absolutely every issue, and succeeds to a rather remarkable degree.
Posted by chaospet at 11:25 PM