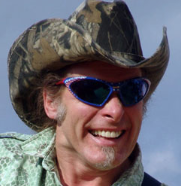 Ted Nugent is currently a radio DJ who repeatedly promises to run for governor of Michigan, but used to be a rock guitarist who liked to shoot and kill things. According to himself he gets off on shooting “nature's surplus”, and he spoons with a bronzed copy of the Second Amendment. Nugent’s defense of handguns is not exclusively based on reason and evidence, however. Any restriction on handgun ownership stems, apparently, right from Mao. He is also a chickenhawk who avoided the Vietnam War by acting crazy. The act seems to have stuck.
He is on the record for displaying dissatisfaction with president Obama (and Hilary Clinton). You can see a video here. At least he places the blame where blame is due: “Barack Hussein Obama did not sneak into power. An army of clueless, disconnected, ignorant Americans invited him to bring his Marxist, glaringly anti-American jihad into our lives”. Rick Perry predictably used the intellectually superior Nugent for his inauguration event as insane governor of Texas. It turned out something of a scandal when Nugent showed up dressed in a confederate flag and yelling deprecatory remarks at immigrants.
He endorses Sarah Palin, however, and as usual in his own breathtakingly delusional manner (proving in the process that he cannot distinguish politics and hagiography, which is a pretty dangerous handicap).
His position on global warming is, however, very sophisticated and informed by science: “Global warming is a fraud. Watch Glenn Beck."
If you like painful idiocy, you can watch Nugent discuss politics with the hardly better informed Roseanne Barr here.
Diagnosis: Unhinged troglodyte who displays the mental acuity and savviness of something that abiogenerated in a clogged drain. It is thoroughly sad that some people actually listen to his moronic screeds and take them seriously.
Posted by chaospet at 10:06 PM