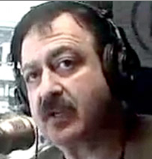 George Noory runs the infamous radio talk show Coast toCoast AM. It is enormously popular, though one suspects many listen to be entertained by the garbled insanity of Noory and his guests rather than because they find it illuminating. The show used to be run by Art Bell (author of “The Coming Global Superstorm”, on which the movie “The Day After Tomorrow” is based), who sometimes returns to spew madness. And it is sometimes hosted by Ian Punnett, who is hardly better (for the record, it has also been run by Mike Siegel).
The topic of the show is the paranormal and occult in all varieties – usually accepting everything without the faintest trace of skepticism – as well as all manners of pseudoscience, including, but not limited to, UFOs, alien abductions, cryptozoology, hauntings, exorcisms, astrology, pseudoarcheology, mystical powers and woo. Among their favored guests are Richard Hoagland and Ed Dames. Noory has also interviewed Andrew Wakefield, which is entirely appropriate, of course. Among the more insane conspiracy theorists and pseudo-scientists interviewed is Geoffrey Simmons, who will be covered later.
Noory is revered by the whale.to people, of course, and for someone like John Rappoport, being featured on the show is apparently the greatest of honors. That also means that he has his detractors as well; our old friend Don Croft thinks Noory has no clue. Croft is certainly familiar with crazy.
Diagnosis: Might of course be a fraud, but does at least come across as desperately lunatic. His voice appears to have great power over weak minds, however.
Posted by chaospet at 11:04 PM