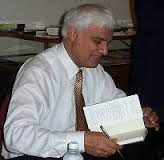 Ravi Zacharias (full name Frederick Antony Ravi Kumar Zacharias) is an Indian-born, Canadian-American evangelical apologist, founder and chairman of the board of Ravi Zacharias International Ministries, as well as an author of numerous books of bigoted vapidity. Zacharias grounds his fundamentalism on the kind of fallacious bullshit such people appeal to, and is – like most of them – pathologically unable to see the errors of his ways. In essence, he seems to believe that a fundamentalist Christian worldview is necessary to ground claims about the origin of being (being oblivious to the fact that Goddidit doesn’t explain anything), life, morality, and destiny – in short, the reason to think God exists is because Zacharias wants him to. In particular, not knowing anything at all about the history of moral philosophy, Zacharias is adamant that “naturalists have no explanation for humanity’s moral framework.” Indeed, Zacharias maintains that while every major religion makes exclusive claims about truth, the Christian faith is unique in its ability to answer all four of the above-mentioned questions (no, Zacharias can’t give you the answers; they’re mysterious and know only to God, dontchaknow).

And Zacharias is a creationist. In particular, Zacharias claims that evolution is incompatible with the second law of thermodynamics (no, he doesn’t understand either, but when has that ever been an obstacle to people like him?), and he expresses skepticism of the fossil record. Indeed, according to Zacharias, Darwin himself warned against accepting his view, saying in The Descent of Man that “if his naturalistic framework were to take hold, he said, unprecedented violence would be the future for humanity.” We’ll join in challenging anyone to find anything resembling that claim in The Descent of Man. Not that Zacharias will care. He fancies himself a buddy with Jesus, and as such rules against lying don’t apply to him.

Zacharias is also a signatory to the Manhattan Declaration calling on Evangelicals, Catholics and Orthodox to engage in civil disobedience with regard to laws which the declaration claims would force them to accept abortion, same-sex marriage or other matters that go against their religious consciences. In other words, the morality he thinks he can ground in religion is not one that measures the moral worth of an action in terms of goodness, decency, autonomy, integrity, justice, benevolence or liberty. Who would have thought.

Diagnosis: The guy actually has a seriously significant international influence, yet is nothing but your standard, fundie, anti-science fool and bigot.
Posted by G.D. at 12:41 PM