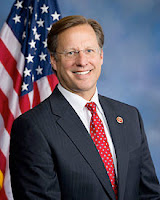 Dave Brat is probably best known as the guy who beat Eric Cantor in the 2014 Virginia primaries. He is currently the Representative serving Virginia's 7th congressional district, and has emerged as an impressive loon.

Brat is an economist and a libertarian. He is also a religious fundamentalist, and has arrived at a kind of synthesis between these positions – according to Brat’s version of biblical economics, God really is, literally, the invisible hand of the market; the invisible hand should accordingly be worshipped as God, and the free market is a religious decree on par with anything else you can find in the Bible. That also means, of course, that economic growth and prosperity is best facilitated by true, fanatic believers: Though he does, as an economist, admit that savings rates, human capital accumulation and so on may drive economic growth, the larger factor really is “the Protestant religious establishment;” that this is the fundamental force of economic growth is something other, professional economists may tend to ignore. And just like Christ was a transformer of culture, capitalism is the key to world transformation; a transformation that, according to Brat, can be achieved when capitalism and Christianity merge; if people follow the gospel, and as a consequence behave more morally [basic, poor assumption there], then the markets will improve. Conversely, Christians and their churches need to adopt capitalism as part of their creed. We’ll give Dave Brat credit for adopting a uniquely American type of crazy. That he got himself elected is less hilarious.

As a politician, he’d had ample opportunity to explain how these ideas translate into political positions. For instance, after having been called out by PolitiFact on some comments about Obamacare, Brat defended himself by pointing to Korea; Obamacare would move America away from capitalism, and to illustrate the dangers of such policies: “Look at North Korea and South Korea. It’s the same culture, it’s the same people, look at a map at night, one of the countries is not lit, there’s no lights, and the bottom free-market country, all Koreans, is lit up. So you make your bet on which country you want to be, you want to go free market.” At least the argument illustrates Brat’s troubled relationship with the phenomenon of distinctions.

Brat has also argued that allowing DREAMers in the military will mean “the decline of Western civilization”. Why think that? Well, remember that “part of the reason Rome fell was because they started hiring the barbarians in.” He’d earlier argued that the DREAM ACT would, along with church-state separation, threaten the “pillars” of American success. In that regard, Brat contrasted the DREAM Act with the teachings of Martin Luther King, whom Brat said “had a true dream of a better day for all of us under the law.” This, he explained (or whatever you want to call what he was trying to do), was because King “came out of the Judeo-Christian tradition.” And that brought Brat to lament how “the faith doesn’t get discussed in school anymore,” that “there’s hardly any free markets left” before concluding that “the rule of law is under threat, it’s called the ‘DREAM Act’,” and it’s an Orwellian plan to undermine American success. Case closed – well, almost: Brat’s real target was the separation between church and state, which he disagrees with, arguing that “[I]f you want a total separation of church and state, get rid of law and get rid of love, because that’s in the tradition.” Yes, it’s a glittering example of a word salad the likes of which we have barely seen from a politician since Sarah Palin’s heyday.

In an April 2015 interview Brat claimed that ISIS has set up a base in Texas: “In our country it looks like we have an ISIS center in Texas now ... You can’t make up what a terrible problem this is.” After being called out for the stratospheric levels of idiocy involved in that claim, Brat’s office said that he had really meant to say Mexico, not Texas. They also cited the conservative group Judicial Watch as their source, which is a move sufficient to merit inclusion in our Encyclopedia on its own. Judicial Watch, on their side (Tom Fitton, in particular), declined to provide any substantiation for its report, but did claim that the FBI, Texas Department of Public Safety and Customs and Border Protection were lying, and were meeting Mexican authorities to formulate a strategy to conceal the ISIS camps from the media, citing unnamed sources. Brat, on his side, claimed that “the political parties are just blind to [letting ISIS into the country] because the money, it causes blinders on their eyes. They can’t see reality clearly.” He neglected to elaborate on which politicians were bought and who exactly it was that bought them.

Diagnosis: One of the most insane, delusional and frightening people alive in the US today, no less.
Posted by G.D. at 3:34 AM