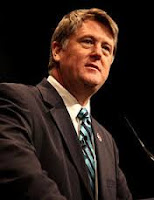 Floyd Brown is a co-founder of Citizens United (yes, that Citizens United) and president of Excellentia Inc. (helping clients “achieve success in the conservative and Christian marketplace”) and a range of other wingnut organizations. Brown specializes in mudslinging and devising dishonest political ad campaigns and is widely renowned for his brazen rejection of facts, evidence, reason and similar liberal conspiracies – and he’s for hire. Indeed, has established himself as one of the nation’s dirtiest political strategists, for instance by devising the infamous Willie Horton ad during the Bush sr.-Dukakis election, and many of his campaigns are undeniably effective. He also pushes “insider” stock tips and advice, gold coins and municipal bonds (here is a report from the Western Conservative Conference, which he organized; it reads just like your average spam mail).

During recent presidential elections Brown and his company released ads asserting for instance that Obama was registered as a Muslim student in Indonesia, and that he attended an Indonesian school that taught Islam as a child. Moreover, according to Brown, “for the international socialist movement of which Barack Obama is a card-carrying member, the U.S. must be brought to its knees, and I guarantee you that Barack Hussein Obama is doing everything he can to bring the country to its knees. He wants to bring it to its knees.” In fact, “[d]oes he simply hate Christianity … Does he hate the United States … or both?” – those were the questions he asked in his 2009 campaign to impeach President Obama (which were, of course, amply covered by the WND). According to the campaign, Obama should be impeached for his “high crimes and misdemeanors,” including the crime that “Obama has consistently refused to approve the release of his actual birth certificate, college transcripts and his medical records ... It's almost as if Obama is intentionally trying to destroy the country ...”

He even teamed up with Jerome Corsi to promote the latter’s book Obama Nation via viral web campaigns and emailings. Few people who have been in the vicinity of Corsi can avoid being in the extension of the description “hysterically insane”. And for a recent example, have a look at this email from Brown declaring that Obamacare “just killed its millionth person.” He doesn’t not even try to back up the claim.

So why the question mark by Brown’s name at the beginning of this entry. The thing is, we don’t really think that Brown believes any of the shit he is promoting, any more than he believes the claims behind the gold coins he is pushing. But he is a wingnut, and he does realize that many of his fellow wingnuts are crazy enough to take any crazy conspiracy theory at face value.

Diagnosis: If you ever listen to anything Brown says about politics and find it reasonable, you are probably a loon yourself. We doubt that Floyd Brown does. He is immensely influential nonetheless.
Posted by G.D. at 4:13 AM