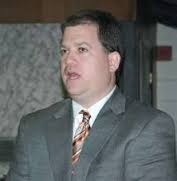 Ah, the state legislatures. (Yes, again). This time it’s South Carolina’s turn, since that’s where you find Lee Bright, representing the 12th district (Spartanburg and Greenville) since 2008. In fact, Bright enjoyed a career as a village idiot even before he got elected – more precisely as the resident village idiot on the Spartanburg School District Six Board from 1999 to 2008. As a school board member, Bright called for teaching creationism in school science classes instead of evolution, explaining that “they’re teaching evolution right now in school, and it’s only a theory.” No, he didn’t even bother to try the deceptive approaches recommended by the Discovery Institute.

As a state senator Bright is just a little bit more extreme on most issues than your crazy uncle, leading to posturing events that usually ends in him submitting quixotic bills just to prove a point to his constituencies, presumably (as well as to move the overton window, perhaps). As an outspoken opponent of the Patient Protection and Affordable Care Act, for instance, Bright sponsored a bill that would criminalize the act. (Yes, Bright is a proponent of the unconstitutional idea of state nullification). It’s all a fight against tyranny, you know, and Bright later warned that the IRS “Brown Shirts” might start enforcing Obamacare with semiautomatic rifles, adding that FEMA is a scam and disaster relief is much more efficiently managed through private donations.

In 2013 Bright announced that he’d seek the nomination for US Senate (against Republican Lindsey Graham; his competitorsBill Connor and Nancy Mace deserve separate entries), on a platform not only asserting that income tax is something out of Nazi Germany and opposition to women with nice nails and pocketbooks getting food assistance (able-bodied food stamp recipients “shouldn’t eat” and the social safety net is “the role of the church”), but – it seems – on refighting the civil war (“If the Tenth Amendment won’t protect the Second, we might have to use the Second to protect the Tenth”). It’s all Lincoln’s fault, really, that Bright is no longer able to enjoy genuine liberty – in particular, Lincoln’s Revenue Act of 1862 “was when government started becoming God and taking over this country.”

He has also warned his fans that Justices Kagan and Sotomayor might want to dissolve the states, and that Obama wants to be king and that Americans today are in fact under “the chains of slavery.” Indeed, he reassured them that in a conflict President Obama wouldn’t send troops to South Carolina because armed forces from the state would turn against him. “I’ve talked to plenty of soldiers,” said Bright. In 2015, after landing a spot as one of three state co-chairs of Sen. Ted Cruz’s presidential campaign, Bright assured his followers that he was ready to stave off Obama’s invasion of South Carolina.

His opposition to immigration is of course based on the idea that “a lot of these folks from terrorist nations are coming in on student visas,” and that the Muslim Brotherhood may be behind the “invasion” going on at the southern border, and he has promised to oppose the “indoctrination” of the “homosexual agenda.” In fact, Bright has taken up what he seems to think is an urgent and desperate fight against the the scourge of gay “recruitment” that apparently has become a major problem in South Carolina – Bright (and fellow state senator Mike Fair) is deeply worried for instance that the “homosexual agenda” has “seized the educational establishment” and has gone on “full march in our institutions of higher ed and we’ve gone from education to indoctrination.” Keep in mind that this is the guy who would prohibit teaching evolution in public schools in favor of creationism.

Of course, like most of these people, Bright claims to revere the constitution, but has apparently never read it. Nullification is one thing, but Bright also argues that federal judges who disagree with him should be impeached.

Here is Bright on marriage equality, the Confederate flag and possession by the devil. It’s strikingly unhinged, even for Lee Bright.

Diagnosis: Hysterical moron, but that hasn’t stopped anyone from winning a political race, it seems. Dangerous.
Posted by G.D. at 3:18 AM