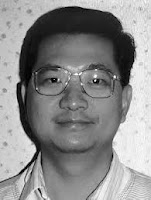 Gene B. Chase, Professor of Mathematics and Computer Science at Messiah College (a fundamentalist Evangelical institution), is a signatory to the Discovery Institute’s petition A Scientific Dissent from Darwinism, and pretty representative of those signatories: real credentials, but not a scientist by a long shot (instead he claims to work on the relationship between mathematics and faith, and has duly established that “it’s impossible to be both gay and evangelical”). But Chase might be too minor even for us.

Slightly more significant, perhaps, is Shun Yan Cheung. Cheung is also a signatory to the Discotute petition, but Cheung is also an Associate Professor at Emory University – not in a field relevant to assessing evolution, of course, but Cheung does at least have a full-time position at a major research institution, and has, indeed, some publications in a totally unrelated field. Cheung is also a hardcore creationist who runs a webpage presenting the overwhelming evidence for the accuracy of the Bible and the falsity of evolution. The site is targeted at non-specialists, of course – don’t expect any engagement with science or scientists – and all the standard creationist PRATTs are predictably there. Here is his apparently incontrovertible evidence for the accuracy of the Bible (“Rational Evidences for Christ Jesus –  heavy emphasis on rational”). Words fail.

Diagnosis: Oh, dear. Good thing Cheung is an engineer and not a scientist, since he wouldn’t be able to distinguish evidence from wishful thinking if his life depended on it. His influence is probably pretty limited, but I suppose he still plays his small role in the battle against sanity, reason, science and truth.
Posted by G.D. at 7:38 AM