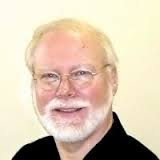 We probably need to cover some of these. Donald Clark is yet another signoatory to the Discovery Institute’s petition A Scientific Dissent From Darwinism, and he does have a PhD in physical biochemistry from the Louisiana State University, though he is – rather typically of the signatories to that list – hardly a scientist. Instead, Clark is Vice President of Development and Medical Affairs at Houston Biotechnology Inc. (we have had trouble locating much updated information about that company). Clark is also a contributor to the Creation Moments website. Indeed, Clark is a young-earth creationist who rejects astronomy as well as biology since it conflicts with his reading of the Bible, emphasizing that “[w]e must interpret our physical observations based on the scripture and not interpret the scripture based on our physical observations.” So, Clark argues, since scientists don’t completely agree on the exact age of the universe, we should rather accept a young-earth perspective with a God “[w]ho stretches out the heavens like a curtain, and spreads them out like a tent to dwell in” – after all, “[t]he scriptures may be showing us that man’s thinking about this redshift phenomenon, and hence, the expanding universe, may not be correct.” Officially, Clark is just JAQing off, but the gist is pretty clear.

Diagnosis: Frothing fundamentalist, and as such Clark hates science more than anything (though he does, of course, claim otherwise): So much so that he has apparently undertaken the effort of learning to mimick its tricks, even if he’ll never really understand them.
Posted by G.D. at 4:36 AM