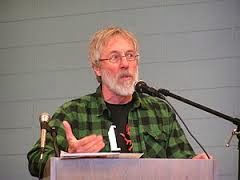 Now, this is a tricky one. John Zerzan is an anarcho-primitivist political philosopher. The basis for his political philosophy seems to be a relentless commitment to a fallacious appeal to nature, with results that are patently absurd and crazy, but nevertheless sort of consistent with his basic premise – hence, it is, we admit, a bit unclear whether he in fact qualifies as a loon by our standards.

In any case, Zerzan’s early career seems to have involved joining up with progressively more sharply leftward groups, every time eventually rejecting them as having settled for a compromise with something he understood to be inherently oppressive and thus abominable. Zerzan’s writings are critical of all of civilization, which he deems oppressive by nature; instead, Zerzan seems to praise the life of hunter-gatherers (in the abstract, that is), mixed with the archetype of the noble savage, and has promptly argued that all of humanity needs to regress to that point in order to rid themselves of oppressive mechanisms and corruption (Murray Bookchin has pointed out that Zerzan’s view of hunter-gatherer societies are “flawed, selective and often patronisingly racist”). Given what Zerzan counts as oppressive mechanisms, it is unclear why regressing to this stage would help, and it takes quite some mental effort to convince oneself that such a society would, in fact, be a better one (maybe that's not the point). But then again, Zerzan’s views on oppression and his suggested solutions probably strike many as rather parallel to Ayn Rand’s views on liberty, and Rand still seems to count quite a few followers in the US.

Zerzan has accordingly objected to tool-making (inclined planes seem to the most advanced technology he is fully comfortable with), art, language, math and the very concept of time itself, as he believes they deviate from his primal ideal and are hence a source of alienation and oppression. He has also claimed that telepathy is the proper way to communicate, though it is unclear what practical advice he draws from that. The argument for desiring this state, and for distinguishing oppressive from non-oppressive engagement with one’s surroundings is, however, that Zerzan thinks it is natural, and hence that humans are somehow “meant” to live thereby.

A fine example of Zerzan’s outlook is found in his criticism of Star Trek: “What Star Trek has to convey about technology is probably its most insidious contribution to domination ... Always at home in a sterile container in which they represent society, the crew could not be more cut off from the natural world. In fact, as the highest development in the mastery and manipualtion of nature, Star Trek is really saying that nature no longer exists.” To go from these observation to a negative assessment you’d need, once again, a rather blatant appeal to nature, as well as a rather Platonic conception of “natural”.

Zerzan is apparently friends (to a measure, anyway) with Unabomber Ted Kaczynski and actually approves of his multiple homicides (or at least, the motivation of self-defense against civilization’s encroachment.) Kaczynski, on his side, seems to think that Zerzan’s ideas are stupid.

Diagnosis: It is, however, a bit unclear whether Zerzan really qualifies – he sometimes seems to have a relatively clear idea of what following his ideas would lead to, and though his goal is … idiosyncratic, that’s not sufficient to make one a loon in our sense. The prevalence of fallacious appeals to nature, on the other hand, bolsters his application pretty strongly.
Posted by G.D. at 3:14 PM