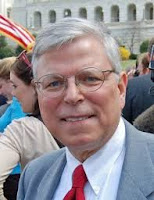 Haywood Bynum III seems to have a lot of good people confused. I am almost completely sure it is satire, but there are people who would in all seriousness make the kinds of claims Bynum makes about homosexuality or evolution, and he’s managed to fool a lot of otherwise good people.

His namesake, Pierre Bynum, is not funny at all, however, and is definitely not satire – even if his views are interestingly similar to those satirically promoted by Haywood. Pierre Bynum is prayer director at the hate group the Family Research Council, no less. As such, Bynum spends his time on activities like calling on the FRC members and sympathizers to pray for God to stop LGBT Pride Month, i.e. to “stop the advance of this official celebration of sin,” and to pray against “homosexual tyranny” (yeah, another one). Says Bynum: “Only heaven knows exactly how this brazen departure from the moral law of God will impact our nation,” which is, you know, an abysmally stupid thing to say. He has also called on God to “intervene” to stop marriage equality in Washington, which, if you think about it, is a rather strange thing to do: If he genuinely believed that God hates gays, and that he himself was opposed to gay marriage because he was just committed to following God’s rules, you’d think that he would pray for God not to do something stupid even if Washington adopted gay marriage. What he actually does, however, suggests that Bynum sort of knows that he is the one who hates gays and just hopes that God will take his side on the matter.

Bynum, a close ally of none other than Cindy Jacobs, is also a staunch dominionist, and a firm supporter of instituting a blatantly unconstitutional religious test for office. That, in Bynum’s mind, would have stopped Obama. According to Bynum “Obama loves to spit in the face of scripture,” and his support for gay marriage is proof that “the spirit of the Antichrist” is behind President Obama’s “deep-seated hatred of God, the Holy Bible and the Christian faith.”

Diagnosis: Complete and utter madman with no redeeming qualities. Dangerous.
Posted by G.D. at 3:56 AM