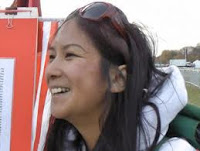 An embarrassment to Tea Partiers, rightwing politicians and Thanksgiving family dinner parties everywhere, birtherism remains popular despite mainstream politicians’ attempts to avoid (without alienating) its proponents – it’s almost as if there were a conspiracy against them. Still, some – usually particularly aggressively lunatic – birthers sometimes manage to draw public attention to themselves. Theresa Cao, a big fan of the WND, is a case in point. Cao, a self-proclaimed birther and nutcase (the latter is not her description, admittedly), drew attention to herself by interrupting the second day of the 112th Congress by screaming, “except Obama, help us Jesus Christ,” during a reading of Article II, Section I of the Constitution (which deals with the requirement for Presidential eligibility). Cao was subsequently removed from the gallery by Capitol police and persecuted for being a good Christian. According to herself Cao felt compelled to let representatives know of the absence of proof for Barack Obama’s eligibility, pointing out that the only hope for the United States is a return to the faith of the Founding Fathers and that doing so is the opposite of Obama’s “socialism” as exemplified by the Affordable Care Act and government takeover of private companies including banks, insurance companies and car companies. Which, of course, is more or less equivalent to saying that Obama is technically ineligible for the presidency because he is not a citizen only using different words.

Diagnosis: Obama’s political views are objectionable; America is a Christian nation; Marxism is bad; therefore, if Chewbacca lives on Endor, you must acquit. Why is that so hard to see? Perhaps “the Chewbacca implosion” is an apt epithet?
Posted by G.D. at 4:31 AM