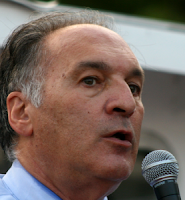 Sometimes bigots make inane arguments against gay marriage, and Paul Caprio – leader of the Coalition to Protect Children and Marriage (currently FamilyPAC) a “family values” coalition in Illinois – is no exception. In essence, Caprio’s argument is that there are very high murder rates in Chicago, and we should therefore (yes, the connection is … nebulous) ensure that kids are raised by married couples. The obvious conclusion to draw from that is of course that gays should be allowed to marry, but Caprio has some trouble recognizing entailments and logical structures and arrives at the opposite proposition. Here is another one of his campaigns.

He is also the signatory to letters to the president (then Bush jr.) opposing any restrictions on CO2 emissions or measures to prevent global warming, just to make sure that no reasonable person ever takes him seriously.

Diagnosis: Apparently he has a certain amount of influence in wingnut circles, which doesn’t reflect well on those circles. There’s otherwise nothing novel about Caprio; he’s quite simply your typical, predictable, bigoted loon.
Posted by G.D. at 3:49 AM