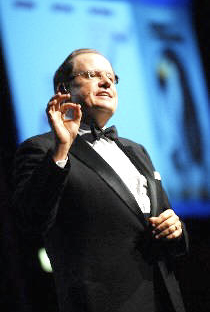 Baehr runs Movieguide which, despite its neutral name, describes itself as a ministry "dedicated to redeeming the values of the mass media according to biblical principles, by influencing entertainment industry executives and helping families make wise media choices" (i.e. rave reviews of creationist propaganda). Baehr is also chairman of the Christian Film and Television Commission and a columnist/movie reviewer for Worldview Times. He wasn’t happy with Religulous, as this review shows (and this review alone merits Baehr’s inclusion in the Encyclopedia):
http://www.worldviewweekend.com/worldview-times/article.php?articleid=4011.

Also a vigorous opponent of e.g. stem cell research (apparently he views The Family Research Council as an authoritative source here); staunch anti-elitist religious crackpot who argues that science (at least science whose results don’t support (his interpretation of) the Bible) is a liberal conspiracy, as in the article discussed here:
http://scienceblogs.com/dispatches/religious_right_leaders/

Diagnosis: Zealous, paranoid wingnut and pathological liar, religious fundamentalist and general loon. Angry. Influence: hard to tell; there are a lot of these guys out there, but he is relatively prolific and seems to have some readers.
Posted by chaospet at 1:48 AM