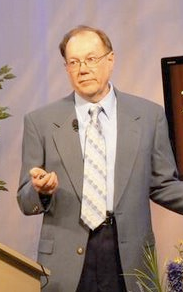 Our next loon is a young earth creationist at the Institute for Creation Research.

Another staunch and thoroughly confused front fighter whose main argument is how persecuted the dissidents to the tyranny of evolution are – in short, your standard ‘I cannot discuss the evidence, so I’ll try to frame my opponents instead’. Admits that ID doesn’t really have a strong theory, but that it doesn’t need it since it’s got all the facts (whatever that means). Discussed here.

Bergman is a dishonest whiner, snower and conspiracy theorist who fabricates stories about persecution of religious scientists. His most nauseating feature is his tendency to snow debates and avoid dealing with devastating objections. Bergman is utterly crazy and ignorant, and his version of the irreducible complexity argument is bizarre even for that mess of an argument.

A summary of a debate Bergman was involved in, which well describes his tactics, is here.

Diagnosis: typical village idiot; despicably dishonest, crazy, paranoid wingnut and kook, and another extreme case of confirmation bias and persecution complex. His ardent efforts seem to have gained him some level of influence among his peers, and he is a medium threat to school curricula everywhere.
Posted by chaospet at 7:21 PM