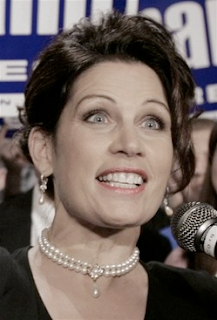 Coming in at #9 we have one of my very favorite loons, the lovely Michele Bachmann.

Bachmann is the United States Representative of Minnesota's 6th congressional district and a member of the Republican Party.

Judging by a number of trustworthy sources and good evidence (mostly the words that come out of her mouth), she may be the single stupidest person alive (perhaps in competition with Steve King, R-Iowa). Staunch supporter of the teabagging party (including all of their contradictory goals, apparently). Good mental compartmentalizer, for she is apparently completely unaffected by (or aware of) cognitive dissonance.
A quickly assembled but unrepresentative sample of the stuff that falls out of her mouth:
http://www.buzzfeed.com/mjs538/the-10-craziest-michele-bachmann-quotes

And a couple of others:

Discussion of her view on the swine flu (and the Democrats’ role in it):
http://scienceblogs.com/insolence/2009/04/burning_stupid_from_michelle_bachmann.php
And one more informative source of Bachmann quotes:
http://www.michelebachmannsaidwhat.com/

Diagnosis: Complete moron – a living embodiment of Dunning-Kruger. Obviously in possession of power and influence, and probably a large fan group as well; in other words very dangerous.
Posted by chaospet at 10:56 AM