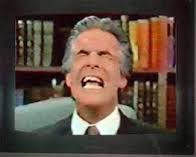 Robert Gibson Tilton is a legendary televangelist who achieved notoriety in the 1980s and early 1990s through his infomercial-styled religious television program Success-N-Life. At its peak it brought in nearly $80 million per year, and was described as “the fastest growing television ministry in America.” It lasted until ABC’s Primetime Live aired an expose of Tilton’s fundraising practices (including testimonials of miraculous recoveries), thereby spurring a series of investigations into the ministry. Tilton’s program subsequently disappeared from the air.

The investigations were started in part after the Trinity Foundation, who works with homeless and poor people in Dallas, started noticing the pervasiveness of people who had lost everything to Tilton. When confronted with the fact that he would just throw away the prayer requests sent to him (which admittedly would have been just as effective) but keep the money – after ABC investigators found said requests in the garbage – Tilton went into denial, saying that ABC had stolen them and put them in the dumpster, that he had “lai[n] on top of those prayer requests” so much that “the chemicals actually got into my bloodstream, and ... I had two small strokes in my brain,” and that he had needed plastic surgery to repair capillary damage to his lower eyelids from ink that seeped into his skin from the prayer requests. He also thought he was justified in using the money to purchase multiple multimillion dollar estates. He also had some problems with some fraud lawsuits, and an incident where he sent a letter to a woman claiming that he just spoke to God and that God was going to heal her husband several months after her husband had died, thus proving that he was lying and knew that he was lying.

Like Jesus, he later returned to television, first in 1994 with a new show called Pastor Tilton that emphasised “demon blasting” exorcism practices usually involving Tilton shouting as loudly as possible at demons supposedly possessing people suffering from pain and illness. It wasn’t very successful (people prefer being defrauded with fluffy self-help advice), but he has more recently returned via his new version of Success-N-Life airing on BET and The Word Network, where he still performs miracles such as making bones grow together (though the embedded video sort of suggests that the patient’s bones did not grow together). A typical fundraising letter is discussed here.

Tilton is the author of several self-help books about financial success, including The Power to Create Wealth, God’s Laws of Success, How to Pay Your Bills Supernaturally [wheee!] and How to be Rich and Have Everything You Ever Wanted. And yes, you can probably discern the nature and quality of the advice from the titles.

His daughter Amy Kushnir doesn’t seem to be a very decent human being either.

Diagnosis: The question mark is obvious. If Tilton believes in the miracles he professes to believe in, then he is a loon. But there is plenty of evidence suggesting that Tilton is perfectly aware of the nature of his business, which would technically disqualify him.
Posted by G.D. at 10:52 AM