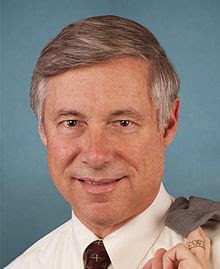 The question mark doesn’t really mean that we wonder whether Fred Upton is a loon. He is almost certainly not. But his official views are sufficiently insane that we’ll count him as one. Upton is the U.S. Representative for Michigan’s 6th congressional district, serving since 1987 (he replaced the absolutely incoherently insane Mark Deli Sijander), and Chairman of the Committee on Energy and Commerce. Due to his environmental policies (and his position of power), the LA Times wrote in 2011 that Upton “represents one of the biggest threats to planet Earth on planet Earth,” which seems accurate. As a politician Upton is staunchly committed to climate change denialism, and is determined to prevent any legislation that pays even lip service to environmental problems. He also assigned John Shimkus to chair the Environment and Economy Subcommittee, which is sufficient to qualify Upton as a loon in his own right.

Now, one suspects that Upton position is motivated more by strategy than actual convictions. As late as 2009, he maintained that “climate change is a serious problem that necessitates serious solutions. Everything must be on the table.” In 2010, however, he co-authored a Wall Street Journal editorial saying he was “not convinced” that “carbon is a problem in need of regulation,” urging Congress to overturn Massachusetts v. Environmental Protection Agency, which would be a completely irrational thing to do if you were only “not convinced” (and cared about anything beyond your own short-term goals, of course). He falsely claimed that there is no scientific consensus regarding climate change and was so (deliberately) misinformed regarding “Climategate” that he advocated for congressional hearings.

Not only has he refused to approve any emission limits on greenhouse gases (e.g. here), however; he has also urged lawmakers to reverse the United States Environmental Protection Agency emissions rules. Carbon regulation, according to Upton, “threatens to drive energy prices higher, destroy jobs and hamstring our economic recovery.” (The American automobile industry supports the regulations.)

In 2007 Upton was a co-sponsor of the Energy Independence and Security Act, which among other things mandated phased-in energy efficiency standards for most light bulbs. But in 2010, after Glenn Beck called Upton “all socialist” for supporting the bill, Upton turned around to lead a failed effort to stop Obama from enforcing the new energy standard. Apparently being called “socialist” by Beck is something people of Upton’s kind take very seriously.

On other issues (healthcare, marriage equality, etc.) Upton generally votes strictly in line with recommendations from the religious right.

Diagnosis: One of the most dangerous people alive. Mad dictators of small countries pale in comparison when it comes to having power to truly harm the world and everyone in it. If Upton knows what he is doing (and one suspects he does), he doesn’t care, and I urge anyone to record his name so that you can tell your grandchildren who was responsible for it all.
Posted by G.D. at 10:43 AM