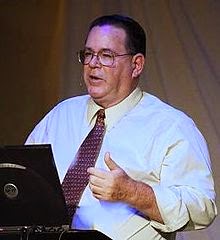 Larry Vardiman is a hardcore and almost legendary creationist “scientist” and signatory to The CMI list of scientists alive today who accept the biblical account of creation. He does have a Ph.D. in Atmospheric Science from Colorado State University, which is, I suppose, supposed to lend a sheen of legitimacy on his ventures in cargo cult science, but his career has mostly been entangled with the Institutefor Creation Research. Vardiman taught at the Christian Heritage College (run by the ICR) as a Professor of Natural Sciences from 1982 to 1989, served as Academic Dean from 1987 to 1989, and as chairman of the astro/geophysics department from 1989 to 2009. Apparently he retired in 2012, but there’s no evidence of any later affiliation with reality-based belief alignment.

He is the author of several books and a frequent contributor to Answers in Genesis’s house journal Answers. For vol. 3, for instance, he (and Wesley Brewer) gave us “Numerical Simulation of Precipitation in Yosemite National Park with a Warm Ocean: A Pineapple Express Case Study”, which took as point of departure a storm in 1996 and pretended it extrapolated to a massive Global flood, ignoring anything having to do with evidence or feasibility considerations in the process. The paper is most notable for Vardiman & Brewer’s discovery of the technique (used by mainstream hydrologists) of publishing multiple papers with the same basic idea and calling each one a case study, even though it is no different than the last paper. Their contributions to volume 4 and volume 5 were very much along the same lines, and here is a summary of Vardiman’s article “Did It Rain Before the Flood?” The methodology is what you’d expect: “The first step is always to examine Scripture carefully.” And his answer is “probably not”. This is supposed to be science, remember. As is, apparently, this one.

Vardiman is perhaps most notable, however, as director of ICR’s Radioisotopes and the Age of the Earth (R.A.T.E.) research project. R.A.T.E. is a joint project organized by the ICR and the Creation Research Society to produce experimental geochronological results that support a Young Earth creationist view of the age of the Earth. It is exactly as feeble as it sounds (you can find a report from one of their conferences here). Creationists affiliated with R.A.T.E. do indeed claim to have experiments that 1.5 billion years of nuclear decay took place over a short period of time to fit the Biblical account of creation (neglecting the obvious problem that the rate of nuclear decay they assume would have blasted all life from Earth in seconds). Of course, the morons carrying out said experiments had no training in geochronology (nor anything resembling any degree of competence whatsoever), and their experiments are methodologically crap (some criticisms here; some more here – most scientists don’t really bother with the crankery, but Old Earth Creationists are usually ardent critics so they get a link for once). As they themselves seem to admit their hypothesis requires positing miracles violating the laws of physics at several points, but insofar as the point is to prove the veracity of the Bible (and God) this … well, it does become a little circular.

The members of RATE include old friends of ours like Steve Austin, John Baumgardner, Don DeYoung, Russell Humphreys, as well as Vardiman, Australian superloon Andrew Snelling, and one Eugene Chaffin.

Diagnosis: They write papers, use technical jargon, go to conferences, perform experiments (sort of) and call each other experts … but it’s like kids playing with mudcakes in kindergarten: they’re not cakes, the rock is not a stove, and you’re not a cook. When the participants are grown up men (mostly), as is the case with RATE, the whole game becomes rather uncanny.
Posted by G.D. at 10:59 AM